Eyes Without Faces, or What To Do If You’re A Brilliant Surgeon And Your Daughter’s Had A Bit of an Accident 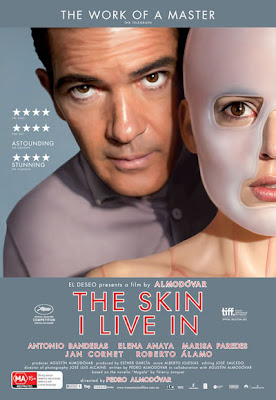 This week Lady P and I have had the good fortune to see two films on the big screen about brilliant-but-mad plastic surgeons doing terrible things to people because of family misdemeanours. Both of these movies, made more than fifty years apart, are the creations of highly respected ‘art house’ movie directors, and they currently bookend a horror movie subgenre that has otherwise been characterised by projects that can only be described as being of a rather lesser quality, even though they can provide their own rewards if viewed in the right mood.

Georges Franju’s classic LES YEUX SANS VISAGE is currently enjoying a big screen revival in various art house cinemas across the country. The print is tatty and scratched and the sound didn’t work on the first attempt to thread it through the projector in our local cinema, but that was all part of the fun to be had, as was watching it with those lured in by the prospect of an 1950s art film who weren’t  expecting to see gory face transplants carried out in sparkling black and white or Alida Valli stabbed in the throat.
I would always argue that Franju’s film is a genre picture more than anything else. The tale of the surgeon responsible for destroying his own daughter’s face and willing to do anything to repair his actions is the stuff of pulp paperback luridness, and Franju certainly elevates it way above its penny dreadful potential, making as fine a horror film as one could hope for with the material. Apart from the nasty bits there’s a pervasive gloom to the film that serves to augment the desperate situation of its central character, wandering her father’s isolated country mansion, a literally faceless wraith assumed dead by the rest of the world. One imagines the city-set scenes at the police station and its environs would be grey even if the picture were in colour, and it never seems to stop raining. Almost from the beginning there is no suggestion that the film is going to end anything other than badly, which is possibly why the final scene is all the more moving, simultaneously suggesting hope and hopelessness, freedom and utter loneliness.  The film was made in 1959 but it’s best viewed out of context with contemporary horror cinema of the time – Hammer were well on their way to becoming the most successful producers of horror films in the world, Hitchcock was about to make PSYCHO, and British company Anglo Amalgamated had just released Michael Powell’s PEEPING TOM. Compared with these slicker movies the Franju film seems very creaky indeed – no less effective, but nevertheless it feels as if it belongs to a different age, making the surgical scenes and the deaths at the climax possibly even more shocking and unexpected. Definitely worth catching if you get the chance. 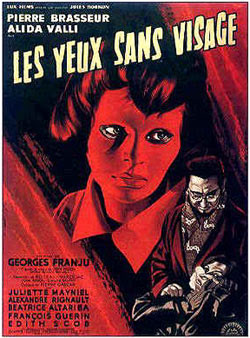 Pedro Almodovar’s THE SKIN I LIVE IN is also on release at the moment and is the latest take on the theme popularised and elevated to art form by Franju. Antonio Banderas plays another brilliant plastic surgeon, one who has invented a new form of artificial skin. He also has more than his fair share of secrets as well as a beautiful girl locked up in his remote country clinic-cum-home complete with operating theatre, but then don’t we all? To say much more would spoil the surprises Almodovar has in store, suffice to say that this is as much a horror film as the Franju picture, and walks the narrow line between EuroTrash and EuroArt – and I mean that in a very, very good way.
Of course to get from Franju to Almodovar fans of this particular subgenre of movie have had to endure a number of efforts which could be considered at best sub-par and at worst sleazy and incomprehensible. First off the English language speaking mark was probably Robert Hartford-Davis’ CORRUPTION, a nasty British version of the story with Peter Cushing causing the burning of his beautiful model girlfriend’s face at a party and spending the rest of the film trying to make it all better. Unfortunately ‘making it all better’ in Corruption-land means hacking girls’ heads off in gruesome detail, extracting pituitary glands the size of a small root vegetable and using a private laser that’s massive but somehow easily transportable from a London townhouse to a country cottage near the sea.. Unfortunately Mr Cushing obviously hasn’t done his laser safety training and everything goes completely bonkers at the end but it’s all ok because not satisfied with one daft ending Hartford-Davis et al have tacked on another one as well that makes everything out to be a dream. I think. Still difficult to get hold of in its country of origin anyone willing to brave this will need to do a bit of searching to find the uncut version, horrible inappropriate incessant jazz music score and all.
Not to be outdone by the Europeans, the US came up with its own unpleasant variation on this theme with 1976’s MANSION OF THE DOOMED. Richard Basehart is the doctor with the accident-prone daughter. She loses her eyes in an auto wreck, resulting in dad popping eyeballs out of other people’s skulls and into hers willy nilly with such abandon it’s a good thing he’s got a great big cage in the cellar to put all the ‘donors’ in. Quite why he locks them up and treats them like stray dogs is a bit of a mystery until we realise this is an early Charles Band production and consequently have to adjust our tasteometer settings to a few notches below zero. Michael Pataki was responsible for directing this one just before starring in perennial TV favourite of our youth ZOLTAN, HOUND OF DRACULA (as Dracula just to avoid any confusion), and after this and appearing in The Bat People he probably deserved it.
And then of course there’s Jess Franco. Usually mentioned only to be condemned, I have a sneaking liking for some of his more art house pieces (stop sniggering at the back there). His 1988 production FACELESS was intended as a much higher quality movie than much of his work of the two previous decades, which admittedly wouldn’t be difficult as anyone who has seen more than a couple of his efforts can testify. Helmut Berger’s the doctor in this one and it’s his sister that gets the hideous facial rearrangement which comes about because one of Helmut’s old patients isn’t happy with his work and rather than complain to her local MP she lobs a bottle of acid at him one evening in a car park. Unfortunately it misses and sister Ingrid gets it instead. Off goes Helmut to his chum Dr Orloff (Howard Vernon) for advice and he suggests old Nazi plastic surgery colleague Anton Diffring. They kidnap model Caroline Munro, causing her wealthy father Telly Savalas to hire private detective Chris Mitchum to find her. A lot of daftness takes place before – surprise! – the face transplant is performed and is a success! The doctors toast their success while leaving Chris and Caroline to die – the end. Well, pretty much. Of course Franco had tackled the subject before in 1961’s AWFUL DR ORLOFF, another one of the director’s films that’s actually worth watching. I do realise that if I recommend any more Franco I shall have to have some plastic surgery of my own to escape irate movie fans who may not be as kindly disposed to the director’s work as I am, so for now I shall leave it at that.
Posted by John Llewellyn Probert at 7:06 pm

Email ThisBlogThis!Share to TwitterShare to FacebookShare to Pinterest
Labels: Columns