Never Mind Kevin, We Need To Talk About The Children! 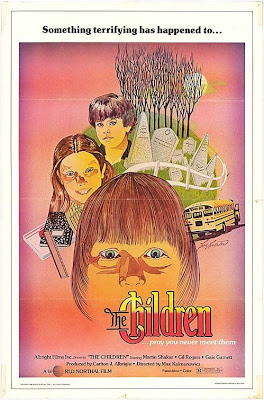 The term handmade can mean many things, from something lovingly and carefully put together by someone with years of experience, to a hastily cobbled together load of old rubbish that you wouldn’t let your children near for fear it might damage them for life.
Which brings us nicely if admittedly in the most contrived way possible to Carton J Albright’s 1980 production THE CHILDREN, which feels very handmade indeed, right down to the main title art that seems to have been drawn more or less freehand by someone who might benefit from a couple of years at art school. Or any school. While throughout much of the movie’s running time one might tend to favour my former definition of the word ‘handmade’ rather than the latter, that doesn’t mean that the movie is without merit. Indeed, in terms of tiny no-budget backwoods efforts this is never less than entertaining, and boasts a few surprises along the way.
In an opening worthy of the worst of Bruno Mattei or Umberto Lenzi, both of whom may have seen this picture and then ‘pinched’ the idea to get the ball rolling on their own ‘perils of technological advancement’ epics HELL OF THE LIVING DEAD (ZOMBIE CREEPING FLESH in the UK) and NIGHTMARE CITY, two workers end a busy day discussing who’s going to buy the beer as they make their way out of the local nuclear power plant. But oh no! What’s that? It’s a leaky pipe they haven’t noticed that’s discharging a yellow gas. And Oh My Goodness the local school bus just happens to be driving past. A shot of the young passengers within reveals two things about the town in which our story is about to unfold. First, there appear to be very few children living there and second, they all seem to have been heavily tranquilised by the local doctor as none of them are fighting, distracting the driver, smoking, vandalising the seats or drawing pictures of genitalia on the seats in marker pen. Perhaps this is to provide a contrast to the evil beings they are about to become or perhaps the properly naughty child actors didn’t turn up for filming that day.
The kids get turned radioactive (I think) which in this film means that they acquire black fingernails and an ability to turn the skin of whomever they hug into burned and bloody scar tissue with the aid of some genuinely unsettling and really rather good makeup effects. The action kicks off with the sheriff finding the school bus abandoned. One of the missing children belongs to the local doctor who, when she isn’t presumably dosing the kids with ketamine seems to spend her time sitting in the garden wearing a bikini that’s too tight while her blind lesbian lover does her best to impersonate LeFanu's Carmilla playing the piano. The doctor gets dressed and heads off to the local graveyard where junior gives her a lovely big hug and a case of skin irritation that not even the biggest tube of eczema cream she can prescribe will cure.
Next it’s time to set up some more victims, which is the cue for the usual collection of walk on character roles by Anyone The Director Could Find to pad out the running time. These include a topless lady and her seriously steroid-overdosed weightlifting husband, a couple of rednecks who are introduced doing their best to sell the old lady who answers the police radio at the local store (?) a couple of dead chickens they haven’t bitten the heads off, a porn-star wannabe with a big cowboy hat who turns up in a car with a telephone and electric windows the up-and-down motion of which gets demonstrated three time in the space of a minute, and the hot pant wearing girlfriend of the local deputy, all of whom get offed by the killer kiddies.
As is often the case in films like this the children give the best performances. Admittedly all they really have to do is hold out their arms, grin and look creepy, but they do it really well. They also react well to the violence that gets meted out to them, including being chopped up into pieces and shot at, in one case with such force that the boy in question gets thrown off a staircase. There’s even a so-daft-it’s-good twist ending involving the annoying pregnant wife of our utterly unendearing hero that leaves you wondering quite why they did that when the film could have merely ended on a heap of dismembered dead little darlings awaiting the inevitable ‘outside world’ to intrude and announce the arrival of paedogeddon.
THE CHILDREN is silly, poorly acted, cobbled together and has a music score that was subsequently lifted pretty much note-for-note by its composer Harry Manfredini for Sean Cunningham’s FRIDAY THE 13TH (which used many of the members of THE CHILDREN's crew, including director of photography Barry Abrams). It’s also a movie that’s never boring, in fact the running time flies by. Fun, creepy, weird, and ever-so-slightly disturbing, it’s an excellent companion piece to Narciso Ibanez Serrador’s WHO WOULD KILL A CHILD?  for when you’re feeling in the mood for a double bill of tiny terrors.
Posted by John Llewellyn Probert at 9:06 am