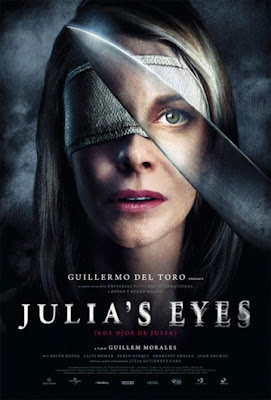 In recent years one country more than any other has given hope to Euro-horror fans everywhere. Atmospheric ghost stories, the kinetic zombie antics of the excellent [REC] and even a splendid series of television ‘FILMS TO KEEP YOU AWAKE’ (PELICULAS PARA NO DORMIR -which I’ll be covering on here in due course) have put Spain on the map as a leading producer of quality screen terror. JULIA’S EYES, which has just come out on UK Region 2 DVD & Blu-Ray after a limited independent cinema run here, is another one to look out for, although how much you will enjoy it will depend on your tastes.

Inappropriately marketed in some territories as a subtle psychological chiller, anyone going to see JULIA'S EYES  because of its implied links to quiet Spanish horror hits like THE ORPHANAGE or some of Guillermo del Toro’s own projects may well find themselves getting rather more in the way of outrageous incident than they bargained for. The rest of us can sit back and relax, safe in the knowledge that the spirit of the giallo seems to be well and alive and making a comeback from Spain.
Julia suffers from Made-Up-Movie-Optic-Nerve-Degeneration, one of those plot devices that allows her to lose and regain sight whenever it becomes necessary to the plot or to aid in the construction of an atmospheric scene. Her sister has the same condition at the beginning but is swiftly put out of the picture (literally) because she appears to be another one of those movie characters who can tie an expert noose to hang themselves with (or do they sell them in ‘specialist’ shops nowadays?). Julia’s convinced her sister was murdered and that the girl’s mysterious new boyfriend is to blame and so the hunt is on, taking her to the hotel where they stayed just before her death by way of a changing room full of naked blind women who sniff out Julia’s presence, and the man who is now stalking her, in one of the set pieces that, along with what is actually a very well developed, tense and mysterious first forty five minutes, certainly endeared this writer to this particular picture.

It’s in the movie’s second half that the audience is going to be divided, when the movie enters seriously silly giallo territory, with the requisite One Daft Thing After Another taking place. However, and where the film scores big points, all these daft things are perfectly executed, the performances are spot on and some of the shocks are so well choreographed that I jumped and cringed along with everybody else. Two of the murders later on suggest that, rather than studying the likes of Del Toro’s PAN’S LABYRINTH and THE DEVIL’S BACKBONE, director Guillem Morales has been rather more influenced by some of the murders in Norman J Warren’s SATAN’S SLAVE and Pete Walker’s SCHIZO. The climactic turning out of the lights has been used in many a picture but there’s no reason why it shouldn’t work again here and in a way it would be disappointing if it wasn’t.
Definitely designed as a crowd pleaser, JULIA’S EYES is delicious entertainment. It’s scary, well paced, and when it realises it’s going to go over the top it does so with verve and enthusiasm, embracing its clichés with gusto and is a much better film for it. It also happens to be a film with a more mature central female character than we get to see from Hollywood, someone who is in a loving relationship, which the film manages to express on several levels and at several points in the movie without interfering with the pacing. Actually it’s a refreshing change to see a modern horror film without a teenager in sight. Lady P and I really loved it. Cracking job, Guillem – we’ll be first in line for your next one.

Posted by John Llewellyn Probert at 10:03 am