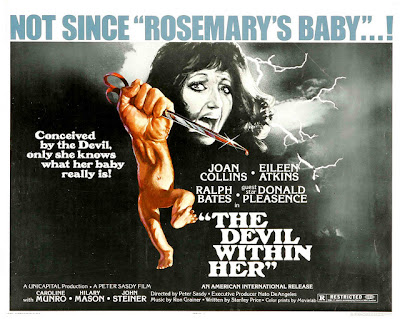 My God what am I doing reviewing this one? It’s awful, a true car crash of a movie that one finds it difficult to believe anyone would sit through once, and I’ve seen it at least three times, including once as part of a Joan Collins double bill with Gerry O’Hara’s THE BITCH (and that’s the only time you’ll see mention of that on here, especially as I couldn’t make it to the end of that particular low-rent disco-filled load of soap-opera silliness without nodding off and I’m definitely not going to watch it again). But I digress…
I DON’T WANT TO BE BORN was known as THE DEVIL WITHIN HER in the US and as the UK poster really wasn’t very good I thought I’d put up its stateside equivalent. The UK video release goes under the title of THE MONSTER, but whatever it would prefer to be called it really is a special film, and probably the only chance you’ll get to see what might happen if a bunch of 1970s BritHorror actors were to be cast in an Italian demonic possession movie that tried to rip off THE OMEN before it had even been released (which is probably partly why it doesn’t bear much resemblance to it.). Part of the reason is that this was a British-Italian coproduction, with Rank really not knowing what it was getting itself into doing a deal with Italian producer Nato de Angeles who also came up with the original story, which is presumably why some of the characters are Italian.
And ‘original’ is certainly being kind to the string of events we get to see. Attempting some sort of chronological order (there are quite a few flashbacks) Joan Collins is a stripper who gets cursed by a dwarf whose advances she spurns. Before you can say ‘that’s a bit tasteless even for 1975’ she’s giving birth unconvincingly in the presence of children’s TV star Floella Benjamin and Donald Pleasance, looking as if he wishes he could be anywhere else but in this film with every single line of dialogue he utters. “This one doesn’t want to be born” says Donald as Ron Grainer’s hideously sleazy but catchy 1970s theme music kicks in to herald the main titles. Mr Grainer came up with some fine TV themes including Dr Who, The Prisoner, and Tales Of The Unexpected, but he never really achieved success in the movies which on the basis of this isn’t surprising (his score to THE OMEGA MAN is quite a bit better but still nothing too special). Where were we? Oh yes – Joan is married to Gino Carlesi played by Ralph Bates sporting an unconvincing Italian accent. Gino’s sister is a nun who seems to spend most of her time at a convent where she has a laboratory where she carries out animal experimentation. This has absolutely nothing to do with the film and one can only presume there was some animal research facility going free that day in which to film a few scenes. Eileen Atkins plays the role as…well…someone in an Italian horror film, which is the note everyone seems to take. Perhaps director Peter Sasdy (that’s Peter Sasdy – HANDS OF THE RIPPER and THE STONE TAPE Peter Sasdy) got them all to watch a badly dubbed Sergio Martino picture and said “You see? THAT’S what I want.” 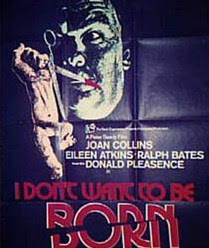 Joan’s baby possesses such superhuman strength that when it isn’t happy gurgling in its pram it’s whacking babysitter Janet Key over the head, cutting off Donald Pleasance’s head with a shovel (you can almost feel the relief ebbing through the screen as he realises he’s finally off the picture) and murdering his way through most of the cast. It all ends very very stupidly indeed with an exorcism scene intercut with a slow motion dwarf death at the strip club. Say what you like but I don’t think there has been an ending like this before or since in cinema history. Before that we are treated to the Italian horror standbys of obvious dubbing (Caroline Munro and John Steiner), gratuitous and unnecessary nudity and a totally bizarre and out of left field dream sequence featuring Joan being threatened by a bloodstained John Steiner and Ralph Bates dressed up as a dead nun. Be assured - I DON’T WANT TO BE BORN is a truly awful film, and it probably goes without saying that I enjoyed it more on my third viewing than on the previous two.
Go on…you know you want to, and here's the grim gloomy UK poster, mad dwarf and all, to round off the experience.

Posted by John Llewellyn Probert at 9:00 am