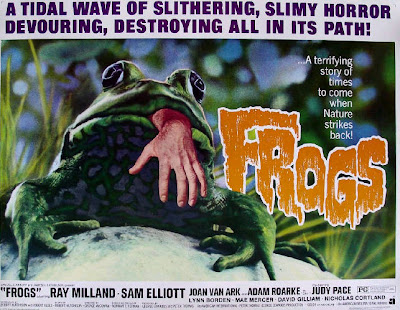 Along with demonic possession movies riding on the coat-tails of the success of THE EXORCIST and THE OMEN, probably the other most popular horror movie subgenre of the 1970s was the ecohorror picture. Movies about nature turning against man, often because of humankind’s scientific meddling, abounded throughout the decade. Despite the attempts of Bert I Gordon (FOOD OF THE GODS & EMPIRE OF THE ANTS) and of course William F Claxton (NIGHT OF THE LEPUS) the main differences between these and 1950s monster movies was that often the animals in question were normal sized. Few were intended to do little else than use some inexpensive animals obtained from the local pet store as a means of providing exploitative thrills. Quite possibly the nadir of the use of animals in this way was the Ted V Mikels-produced THE WORM EATERS but that’s for another time. Or, as anyone familiar with Mr Mikels’ work may be relieved to hear, quite possibly never. One of the first ecohorrors out of the gate was FROGS, an AIP production directed by George McCowan. McCowan spent almost his entire career in television, and his CV boasts mainly episodes of FANTASY ISLAND, STARSKY & HUTCH and CANNON, but he took a bit of time out in the early seventies to direct THE MAGNIFICENT SEVEN RIDE!
And FROGS.
A tiny moment of nostalgia here if I may. The UK quad of FROGS was one of the very first pieces of film memorabilia I owned, and the tag lines ‘Slithering Slimy Horror!’ and ‘If You’re Squeamish Stay At Home!’ screamed out from above a picture of one of the title creatures with a human hand in its mouth much to the chagrin of the rest of my family.
On a private island in some mystical part of America where boa constrictors, rattlesnakes, alligators, monitor lizards and enough frogs to stage a live version of an old Paul McCartney single all live together, octogenarian wheelchair-bound Ray Milland is busy gathering his dysfunctional family around him for a July 4th birthday celebration. Into this unhappy mix floats Sam Elliott in his canoe. Sam’s been shooting some pictures for a magazine article on environmental pollution, which has been a handy way of showing a few shots of bin bags and Coke cans floating around over the opening credits, as well as the necessary fullscreen amphibian visage over which the title itself is imposed to an almighty burp of Les Baxter’s self-performed electronic music score. Elliott gets run over by Adam Roarke’s speedboat and by way of apology gets taken chez Milland to dry out and meet the rest of the family. And lots of frogs. Eventually anyway. Milland’s family includes Joan van Ark who gets to wear the most appalling yellow romper suit ever seen outside of a carry-cot. Milland has lost his handyman and asks Elliott to go and look for him. The fellow was last seen spraying insecticide and so we already know what has most likely happened to him. Sure enough it’s not long before he turns up with his face in a ditch, the victim of froggy revenge. As various members of the household succumb to animal-engineered accidents it soon becomes clear that the wildlife is taking over and the frogs are in charge. Milland refuses to leave the family homestead, leaving Elliott, van Ark and a couple of kids as the last ones standing as they try to escape.
FROGS is buckets of fun. Most of the deaths involve a degree of intelligence and planning not commonly encountered in simple vertebrates. A murder in a greenhouse requires the lizards in question to not just knock over bottles of chemicals but to presumably be able to read the labels on the jars so they know which bottles to smash so the contents mix to produce a lethal gas. As I have already mentioned above, at least one rattlesnake has braved its long journey from its normal desert environment to take part in the Florida-based swampy fun, and the frogs all get so excited they either don’t know which way to leap or the frog wrangler didn’t know which way to throw them. Slithering slimy horror? Oh yes. And wonderful fun, too.
Posted by John Llewellyn Probert at 10:41 pm