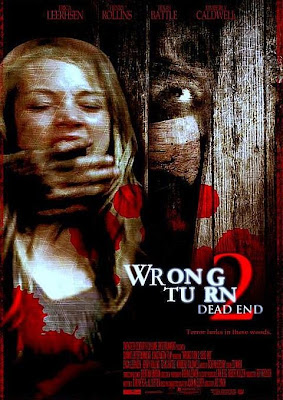 One of the wonderful things about this genre of ours is that joy can come from the most unexpected places. Rob Schmidt’s original WRONG TURN (2003) was an okay hillbilly horror movie in which Eliza Dushku, Desmond Harrington and friends encountered a trio of deformed mutants and suffered the consequences. Schmidt went onto direct one of the few episodes of the second series of MASTERS OF HORROR worth watching - Right To Die, and in fact it was that TV episode that encouraged me to seek out his debut picture.

Joe Lynch, on the other hand, (who directed WRONG TURN 2) I met at FrightFest last year where he and his friend Adam Green (HATCHET, FROZEN) were premiering their new drive-in anthology movie CHILLERAMA. Lynch seemed such a personable chap, and so alive with the love of all things Mortal Cinema-esque (as did his colleague, I hasten to add) that I thought it only charitable to seek out what I assumed would be a fairly routine effort.
Far, far better than it has any right to be, you will know if you’re going to enjoy WRONG TURN 2 before the titles have finished when a blonde-haired young lady called Kimberly is despatched in a way so over the top outrageous that it will either be time to switch off the film or settle down for a hillbilly horrorfest of near-crazy proportions.
This time, instead of people randomly lost in the woods the plot centres around a simulated post-apocalypse reality TV show. The participants are introduced in such a deserve-to-die way as to bring a nostalgic tear to the eye of even the most hardened fan of slasher films. What then follows is an exercise in country carnage, with several scenes going over the top in terms of violence. Judging from the way certain scenes seems to have been included simply on the grounds of outrageous bad taste one also wonders if Mr Lynch may also harbour a love for the gleeful excesses of John Waters. In fact a viewing of his CHILLERAMA episode almost confirms it (I’ll leave you to find out the title yourselves).
As well as having a healthy sense of gory fun the cast is peppered with familiar faces from these sorts of things. Both Crystal Lowe and Texas Battle (I suspect these aren’t their real names) appeared in FINAL DESTINATION 3 as the one who dies naked in a tanning booth and the chap who gets his head squished in the gym, respectively. Walter Murphy is the only carryover from part 1, doing his best John Carradine impersonation as he tries to provide some explanation as to why the mutants developed in the first place and allowing Lynch to provide a nod to PROPHECY. In fact there are plenty of homages for horror fans to pick up on, with scenes reminiscent of everything from THE TEXAS CHAINSAW MASSACRE to TROPIC THUNDER, but in a good way.
So, highly unexpected, highly outrageous and highly enjoyable. Well done Mr Lynch. On the Mortal Cinema shelves lurks WRONG TURN 3, which will have a hard time living up to this one, but only time will tell.

Posted by John Llewellyn Probert at 6:00 am