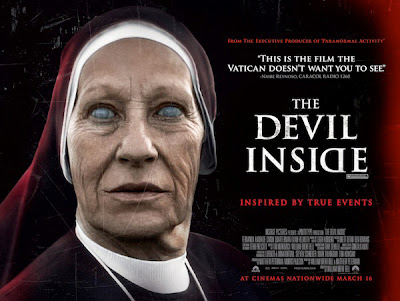 A found footage movie that is as daft as it is entertaining, THE DEVIL INSIDE manages to pull off the difficult feat of being utterly silly but never less than watchable for its brief running time of just over eighty minutes.
Back in the 1980s we discover via newsreel footage that three people at the US house of Maria Rossi have ended up dead during the course of an exorcism. Thankfully Maria wasn’t left too traumatised to be able to telephone the police, but after being found guilty of the murders but insane, for some reason rather than be confined to her friendly local neighbourhood hospital for people who’ve gone bonkers due to exorcisms Maria gets carted off to a Catholic Hospital For The Hopelessly Insane in Rome. As you do. Many years later (in 2009 to be exact) Maria’s implausibly photogenic daughter Isabella (Fernanda Andrade) has decided she wants to know what’s going on, and that the only way this can be achieved is by having a documentary filmed about her by Michael the cameraman, who obviously hasn’t seen [REC] or he’d know that being in a low-budget European-based found footage horror film essentially means it’ll be curtains for him at some point (probably the end, actually).
So off Isabella travels to Rome where despite having never been there before she shows remarkable ability at being able to drive around the city centre while talking to the camera and pointing out various landmarks. Next she’s off to the highly-unlikely-sounding-to-really-exist Exorcism school where she interrupts a lecture and we get to see a sub-sub version of The Exorcist on video, after which the priests get to debate about whether or not the girl is possessed or if she’s just a bit mental.
Isabella hooks up with two of the priests, bristly bearded twitchy Father Ben (Simon Quarterman) and nervous ex-doctor Father David (Evan Helmuth). After a visit to see her mother in a very Italian horror film lunatic asylum where the old woman burbles madly, shows Isabella all the little crucifixes she’s carved into herself and that she knows Isabella has had an abortion even though there’s no way she possibly could, Ben and David let slip that with very little training and absolutely no endorsement from the Catholic Church whatsoever they are doing exorcisms on the side. With a prime candidate in Mrs Rossi and all the medical equipment that David has presumably stolen from his former job to help them, nothing could possibly go wrong, could it?
I shouldn’t really say much more about this in case people want to watch it for themselves. THE DEVIL INSIDE has had a cascade of quite terrible reviews but if you love low-budget horror, and especially low-budget Italian Exorcist rip off horror, don’t for one second let the opinions of those less well informed than yourself put you off. As a run up to Mrs Rossi we get to see the boys exorcise a young girl who has naturally been put by her parents in their dripping brick-lined basement rather than tucking her up in bed, and this whole scene is really rather good, as are a number of other shock moments and horrific scenes that are telegraphed and orchestrated very well indeed.
The reason many people will not like THE DEVIL INSIDE is that it really does get pottier as the film goes along, to the extent that you will either be cheering or you’ll have left the cinema. At one point during the proceedings, having been through hell and in fear of excommunication, Father David pops off to do a baptism which, for no reason at all, Michael decides to pop along and film as well, which is just as well because otherwise we would have had to rely on them just telling us about the crazy baby-font horror fun that ensues rather than seeing it for ourselves.
The movie reaches a splendidly frenetic and silly climax in a hospital, where again director William Brent Bell proves that he’s actually rather good at orchestrating mayhem. This is then followed by an ending so silly and so abrupt that this has to be the first time in ages I’ve seen a British cinema audience actually sit through the credits rather than get up and leave. I'm also presuming that the reason there's no music over the end titles is because they couldn't get the rights to the INXS song but by the time they found out the composer had gone home.
THE DEVIL INSIDE is not for everyone. In fact I’d go so far as to suggest it’s for hardly anyone. It’s a load of old rubbish, it really is, but very very entertaining rubbish. Besides, any movie where a blind nun turns up for a fraction of a second just so her face can go on the poster has its exploitation heart in the right place.
Posted by John Llewellyn Probert at 9:32 am