The Living Dead at the Manchester Morgue (1974) 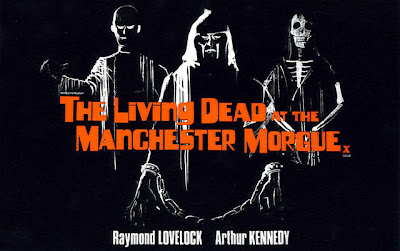 Here’s a film that holds very special memories for me as I first watched it many years ago and on the big screen no less, thanks to the efforts of the Abergavenny Film Society, who I am sure had no idea what they were getting themselves into when they hired a print of this back in the very early 1980s to be a part of an otherwise rather more highbrow European film season. “Apparently it’s very popular with university students,” I was told by one of the elderly committee members during the break as we sipped our mellow Birds coffee and munched our Rich Tea biscuits in the old school room that was serving as a cinema “the print is fully booked up for the next year!” I remember trying to educate the non-horror non-Eurotrash-loving film society about the works of Fulci, Lenzi et al but didn’t get very far before we went back to watch the film’s second half. So that’s how I prefer to remember Jorge Grau’s seminal zombie epic - all splicey and crackly with poor sound and a shocked audience laughing rather bewilderedly at the dubbing and the rather peculiar plot developments.
But despite its (few) negative aspects there’s an awful lot to love about THE LIVING DEAD AT THE MANCHESTER MORGUE, not least of which is the backdrop against which the events on screen take place. Asked to deliver a Euro version of George A Romero’s NIGHT OF THE LIVING DEAD Grau and his team (some of whom would later work with Fulci on his classic zombie movies including makeup man Gianetto de Rossi and editor Vincenzo Tomassi) decamped to England’s lake district and were fortunate enough to catch it in typical English weather. The gloomy, dreary countryside is somehow given an otherworldly, lush feel to it by the mostly Spanish crew. Even the village in which the action takes place feels as if it isn’t really in England at all, but part of the Euro neverneverland where all the weird monsters live.
Ray Lovelock is George, heading off to the countryside for a quiet weekend “listening to the grass grow”.  Edna (Christine Galbo) backs over his bike at a petrol station and soon she’s giving him a lift. She’s there to visit her heroin addict sister but before you can say “They’re coming to get you Edna” the recently resurrected corpse of Guthrie the loony is trying to do just that. It’s all because of a pest control system that looks like a combine harvester without, well, the harvester bit that’s been set up in a local field. As well as resurrecting the dead it’s turning babies into killers and sadly we don’t get to see much more of that after one blinds a nurse. Edna’s sister’s husband gets killed and there’s only one suspect, at least according to shouty shakey handy policeman Arthur Kennedy who rants a lot about long haired hippies while wondering where he’s mislaid that bottle of J&B he really should be regularly swigging from.
It all goes zombie-shaped at the end of course with the undead attacking a hospital, doing quite unspeakable things to the telephone operator and killing both George and Edna with a scant few minutes for a coda and a freeze frame on the naughty machine that started it all.
I’ve seen this several times now since all those years ago in Abergavenny and thanks to DVD it now has a new lease of life and thankfully a much cleaned-up print. Like so many EuroHorrors of that time the dubbing is a bit rubbish, the plot is a bit ropey but none of that matters because there’s such an atmosphere to almost every scene that you cannot help but want to immerse yourself in it. There’s nothing quite like THE LIVING DEAD AT THE MANCHESTER MORGUE, and no film as far as I am aware has managed to give the Lake District such a sense of lush, bleak, grim forbiddingness that really does make it feel like nowhere you’ve been, or would ever want to go.
Not in real life, anyway.
Posted by John Llewellyn Probert at 8:52 am