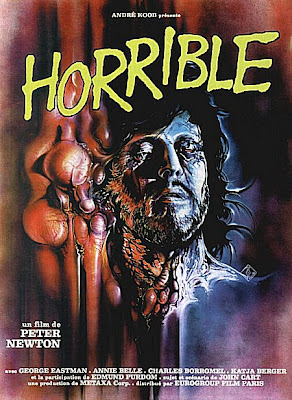 Recently at Probert Towers we subjected ourselves to Joe D’Amato’s THE ANTHROPOPHAGOUS BEAST aka THE GRIM REAPER. It was our first brush with the directorial oeuvre of Mr D’Amato and also happened to be one of the most boring horror films I have ever seen, consisting of about seventy minutes of Tisa Farrow and her friends wandering around a deserted Greek island followed by twenty minutes of really tasteless murders. The film had so little in the way of redeeming features (none, in fact) that I didn’t feel moved to review it for House of Mortal Cinema. On the documentary that accompanied ANTHROPOPHAGUS (oh yes I watched that too) the late Mr D’Amato states that the film was such a success that he made a sequel, titled ROSSO SANGUE aka HORRIBLE aka ABSURD aka ANTHROPOPHAGOUS BEAST PART 2. D’Amato (real name Aristide Massaccesi), never one to pass up the opportunity to hide behind yet another pseudonym, credits the direction of HORRIBLE  to one Peter Newton. After the first film my expectations were absolutely rock bottom, which may go a long way towards explaining why I ended up having a bit more fun with this one.
George Eastman / Luigi Montefiore, tall, imposing and rather scary looking star of ANTHROPOPHAGOUS, BRONX WARRIORS, NEW BARBARIANS and many others is being chased through the grounds of a country house by priest Edmund Purdom. He climbs over the iron gates that border the property but whoops! slips and impales himself on the railings. He toddles along to a local house with his guts hanging out and is taken to a nearby hospital, where they patch him up. He wakes up during the anaesthetic but apparently his ECG is okay, which is odd as the device being used to monitor his heart rate is a cathode ray oscilloscope but to be honest that’s the least of the mistakes on display in this bit, including surgical gowns that only come down to the elbows so you can see the sleeves of the actors’ jumpers and not just one but a whole collection of X-Rays that someone has put up  upside down.
George wakes up, shoves a handy drill through a nurse’s head and escapes to go on the rampage. The police turn up, as does the priest, who explains that George is the product of an experiment that has gone wrong so that now as well as being mental he’s almost impossible to kill. Apparently he’s also Greek which allows a very tenuous connection with the first film that will later prove to be completely irrelevant but more on that in a bit. George utters not a word of dialogue as he goes off on one of the most tasteless killing sprees ever committed to celluloid, with a bandsaw to the head death in a slaughterhouse being particularly unpleasant, although a pickaxe through the skull of a babysitter is pretty horrible as well.
George ends up back at the house he first went to when he was injured. Mum and Dad have gone out, leaving their babysitter to look after one of the worst child actors in history, one of the most badly dubbed dogs ever, and a girl with her head in traction who’s upstairs and confined to her bed as she can’t move.
So far we’re about forty minutes in and I have to say it’s one of the breeziest, sleaziest, daftest, funniest forty minutes of horror I’ve seen in quite a while. The action slows down a bit while the grim and grotty police drive around the same couple of streets searching for him. There are some more murders and eventually the girl in traction has to get out of bed, taking an age to do so while her nurse gets killed in another excessively nasty scene with her head being shoved in an oven before she eventually has to be stabbed to death with scissors. The girl blinds George before, after a bit of cat and mouse stuff, she hacks his head off. The End.
Joe D’Amato’s best work has been in roles other than director, specifically either as director of photography (WHAT HAVE YOU DONE TO SOLANGE?) or producer (STAGEFRIGHT). He does a better job here than on ANTHROPOPHAGOUS but still hasn’t learnt the value of close-ups, medium shots or anything that involves him having to do much more than just wave the camera in the general direction of whoever’s speaking at the time. How this is meant to be a sequel to ANTHROPOPHAGOUS I have no idea. In the ANTHROPOPHAGOUS documentary D’Amato claims it’s a prequel to the first film, so how George gets his head sewn back on and his sight restored before losing all his hair and going back to Greece to try and eat Tisa Farrow is presumably something Joe was saving was ANTHROPOPHAGOUS 3. HORRIBLE is just that, but it is buckets of fun compared with its predecessor. If you really, really have to watch a Joe D’Amato film then this is probably the one to subject yourself to.
Posted by John Llewellyn Probert at 8:59 am