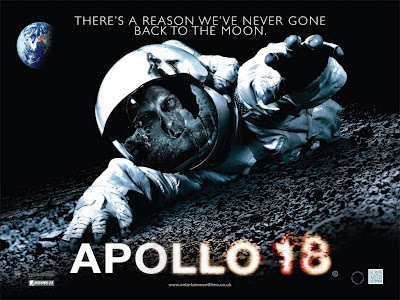 Here’s another film I really liked when I saw it on its initial cinema run last year and then was quite surprised to read the considerable number of terrible reviews it subsequently received. It’s always a delight to revisit a film on DVD and find that my initial impressions about a movie haven’t changed and certainly that’s the case with APOLLO 18, a low-budget found footage movie set almost entirely on the moon.
Admittedly it’s the ‘recovered film’ angle that doesn’t really work and it’s easy to pick holes in this aspect of the storytelling. However, if you approach it as a 1970s BBC Play for Today where the writers have tried to do a William Hope Hodgson - style ghost story with astronauts instead of sailors and thrown in a dose of M R Jamesian corner-of-the-retina creepy-crawliness for good measure, the chances are you’ll get more out of it than the average cinemagoer raised on Michael Bay explosion-a-minute expectations of movies set in outer space.
The opening captions for APOLLO 18 claim that in 1974 the US attempted another moon shot that was subsequently covered up. Loaded with more cine-cameras than could probably be found in the average branch of Currys at the time, our three intrepid astronauts are launched off into the stratosphere, where, once they reach the moon, one of them remains in orbit while the other two pilot down onto the surface where yet more cameras get set up to allow a few more angles to aid in the storytelling. Once there they discover the remains of a Russian craft and its dead cosmonaut, who appears to have been killed. But by what? The only thing on the moon is rocks, and they can’t be creeping around, can they?
One of the reasons the film has been criticised is because it’s slow, and certainly not a lot happens in the way of scares in the first half an hour of the film’s brief 83 minute running time. But this is very much a slow build of a film, and once the scares kick in they’re very effective. What the film also does very well is convey the sense of absolute isolation of the astronauts, much as the seafaring horror stories of William Hope Hodgson achieved at the beginning of the twentieth century. This, combined with the slowly building creepy scuttling horrors that slowly reveal themselves, mean that APOLLO 18 is probably best enjoyed at home as a quiet night’s viewing rather than a raucous Saturday night out.
As I’ve mentioned above, the film has also been criticised for its use of the found footage method to tell its story, and that does require a few leaps of faith that less involved viewers won’t be prepared to make. One of the reasons this method has found favour with horror film-makers is, I’m sure, because modern cinematographic techniques have now become so sophisticated that it’s actually impossible to make a gritty, grainy, grotty-looking horror film anymore without the end result looking horribly self-conscious, post-modern or, to the eyes of the above-mentioned Michael Bay fan, ‘shit’. The good old days of filming something in 16mm and then blowing it up to 32mm for cinema distribution (such as THE EVIL DEAD or pretty much anything by dear old John Waters in his heyday) are sadly long gone. Found footage gets you round this because anyone equipped with an early 1970s cine-camera was never going to come home with CLOSE ENCOUNTERS OF THE THIRD KIND and the shaky, blurry, semi-incompetent-1970s-Dad style of film-making can be easily manipulated to the horror film maker’s advantage. Not all of these films work, but APOLLO 18 is actually one of the better ones and deserves more of a chance than many reviewers gave it, for that and for, consciously or not, actually having more literary influences than the average outer space horror film.
Posted by John Llewellyn Probert at 6:57 am