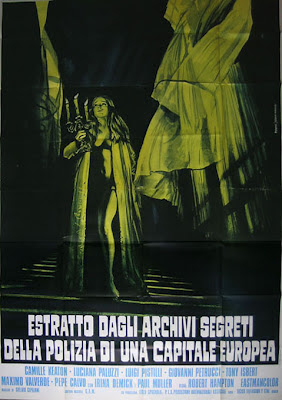 Here’s an Italian-Spanish coproduction from 1972 that’s meant to be set in England but quite obviously isn’t. It also makes no sense at all, and its original Italian title, ESTRATTO DAGLI ARCHIVI SEGRETI DELLA POLIZIA DI UNA CAPITALE EUROPEA (TAKEN FROM THE SECRET POLICE FILES OF A EUROPEAN CAPITAL) doesn’t help.
Three hairy hippies (all male, I hasten to add) and Camille Keaton are enjoying the blistering English sunshine on a yacht owned by Bill, one of the hippies, who comes from a rich family and has a rather over-attentive mother, to whom he has given a string of pearls in a flashback. Quicker than you can say “a couple of minutes in is a bit early in a film to have a flashback isn’t it?” we learn that the pearls carry a curse and mum doesn’t want them. So Bill does what any young chap in an Italian exploitation movie would do in 1972 - he gives them to Camille Keaton, once they’re off the yacht and relaxing on the beautiful golden sands of a typical English beach. Soon it gets dark and they get bored, so they hop into their very English mode of transport (a dune buggy) and set off home.
Unfortunately they run out of petrol, and the only petrol station for miles around might be manned by the devil (we learn that a bit later, although it feels like a lot later). Still petrol-less they get as far as the manor house of Lord and Lady Alexander (the very English Luigi Pistilli and Luciana Paluzzi) who give Camille her own bedroom and bathroom and stick the other hippies in a room with just a table and no lights. Camille has a bath and the hairy chaps play cards as lightning flashes, thunder rumbles, and everyone else in the house prepares for some kind of Satanic ritual. Camille walks down a flight of stairs with curtains billowing in the only really decent shot in the film, and pulls her necklace off.  Pearls go everywhere and Camille goes on the altar to Satan. She’s about to be sacrificed when it’s Hippies To The Rescue! Then everything goes a bit (more) mental. The satanists all hack each other to bits in some over the top gore scenes reminiscent of the Monty Python Salad Days sketch and the hippies plus Camille run away to Bill’s father’s house. It would seem Bill’s parents are so rich they have separate houses so they don’t actually have to see each other, ever.
Once inside they switch on the TV to see a news report about the slayings. Scotland Yard appear to have arrived on the scene and bagged up the bodies and put them in ambulances quicker than it has taken our heroes to travel a mile or so. The police have also discovered some important clues, namely a necklace that could not possibly have belonged to Lady Alexander (presumably it was the wrong size) and a guitar left behind by the murderers that can only mean one thing: all this death has been the work of hippies!
But that’s the least of their worries. Secondary to actually being in this film in the first place, our colourfully dressed hirsute heroes are now starting to get bumped off. Bill gets painted all blue and green and falls out of a wardrobe (don’t ask me) while another one cuts his own throat. The third tries to get off with Camille but stops when he sees her face rotting off and instead goes for a ride on his motorbike very fast while looking behind him all the time and not even wearing a crash helmet. Scant surprise, then, that he ends up in the river with both his legs broken and then drowns.
Camille gets taken to the local mental hospital (because there’s always one close by in these films) and ends up skewered to a bed. Then her ghost walks out of the hospital to be picked up in a limousine by Satan the gas station attendant before turning into Luciana Paluzzi who asks to be taken home.
As with so many of these pictures, there are tiny bits of really good stuff in here, and the ending reminded me of the dreamy, classy, rubber reality of Mario Bava’s LISA AND THE DEVIL, made around the same time. Unfortunately it’s all just a little bit too incoherent, the clothes are just a bit too horrible, and the men are just much too hairy, to make it anything other than a curiosity piece for those so inclined. Riccardo Freda directed this one, and apparently he wasn't too happy with the end result. Sadly, neither was I.

Posted by John Llewellyn Probert at 6:45 am

Email ThisBlogThis!Share to TwitterShare to FacebookShare to Pinterest
Labels: 1970s, Eurotrash Corner, Trapped in the Room With It