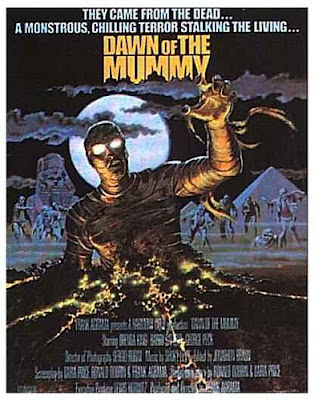 When nations come together anything is possible – world peace, an end to poverty and hunger, even a new respect and tolerance for different cultures. It’s also possible to end up with DAWN OF THE MUMMY– a South African-Egyptian co production with Italian special effects and disco music from the Palestinian bloke who wrote the theme for the HE-MAN cartoon series. It’s difficult to know where to begin with this film that rode on the coattails of the popularity of the zombie subgenre kick-started by George Romero’s DAWN OF THE DEAD and kicked along like a rapidly deflating football by a bunch of delinquent Italian schoolboys led by Lucio Fulci with his questionable chums Bruno Mattei and Marino Girolami.
What could have been a fantastic bit of gory knockabout fun is fumbled a bit by director Farouk Agrama, who basically crosses the standard ‘mummy’s curse’ storyline with BBC Children’s TV favourite BAGPUSS. For those unacquainted with the saggy cloth cat who came to life when little Emily wasn’t looking, the premise of the TV show was that when Bagpuss woke up, all his friends woke up as well. And what a ragbag collection of motheaten Victorian horrors they were, including Gabriel the toad, Madeleine the rag doll, and some tiny rodents who usually lived in a ‘Mouse Organ’ (US readers are better off not asking). Maybe one day BAGPUSS will have to be featured in the TV section. Anyway, in DAWN OF THE MUMMY, when the titular ancient pharaoh wakes up, all his friends wake up too, but rather than then enact a winsome children’s story (although that would have been interesting) they proceed to wreak havoc and eat everyone.
This all sounds great but for the most part it’s sadly not, due to a marked degree of incoherence in the plotting and no acting or characterisation to speak of. Horror prospectors keen to sift through the detritus of stuff like this will be rewarded with two fantastic bits: the reanimation of the mummy’s undead servants against a setting sun is superb, as is the ending where everything goes mental (starting with a wedding reception where the bride ends up on the menu). The aforementioned pounding euro-disco music is remarkably catchy as well, and deserves a CD re-release (it’s already on LP, oh yes). The poster's fantastic, too. In fact it looks as if they spent more on that than the entire film. Apart from those redeeming features that definitely make it worth a watch or two for those of us who just can't help ourselves, DAWN OF THE MUMMY gets a ‘poor - could do better’ mark. But it’s still about 1000000 times better than any Mummy films that have been made since then. Let’s just hope they never let Stephen Sommers loose on BAGPUSS.

Posted by John Llewellyn Probert at 8:22 am

Email ThisBlogThis!Share to TwitterShare to FacebookShare to Pinterest
Labels: 1980s, Eurotrash Corner, Trapped in the Room With It, Zombies