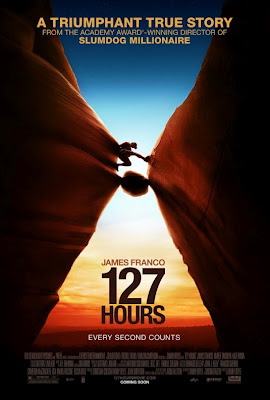 I’ve been a fan of Danny Boyle’s since I saw SHALLOW GRAVE on its initial cinema release, and my appreciation for the man was understandably increased when I read that the reason he got Simon Boswell to score that film was because Boyle was familiar with Boswell’s work in contemporary Italian horror cinema of the time. Several of his subsequent films have contained elements of horror (the dead baby of TRAINSPOTTING, the blinding of the beggar child in SLUMDOG MILLIONAIRE) and he even made a good stab at a properly disturbing British horror film with 28 DAYS LATER. 127 HOURS is based on a true story, but is no less horrific for that. In fact as an out and out horror film it qualifies on several levels, all of which work well enough together to form a tour de force experience in disturbing cinema.
Aron Ralston (James Franco), a mountain climber, canyoneer and thrill-seeker sets off for a weekend’s exploring of the Blue John Canyon in Utah. He gets to ride his mountain bike over the landscape, meets a couple of girls who invite him to a party, and then falls down a gorge and gets himself stuck when his right arm gets wedged between a boulder and a canyon wall.
This is where the film gets interesting, and where it becomes a virtual single-hander (sorry) for actor James Franco, who has to contend with diminishing water and food, the elements, the fact that no-one’s going to come and rescue him, and the fact that unless he can do something to free his trapped arm he’s going to die there.
Thankfully, Boyle is a director who appreciates that this kind of material, if presented to a paying audience, needs to be entertaining first and worthy second. He also appreciates the difference between keeping an audience engrossed and poking them in the eye every couple of minutes to remind them to wake up. Consequently, while we get a lot of visual trickery (split screen, CGI, soft-focus flashbacks), none of these techniques ever feel intrusive, and Boyle gets the balance just right so that they add to the feelings of Ralston’s isolation and desperation rather than detract from them.       And yes, I do think 127 HOURS is a horror film. On the most superficial level it plays on Algernon Blackwood’s themes of man vs the wilderness. A wonderful shot early on takes us from Ralston’s just-trapped self out of the gorge and across the beautiful but wild and forbidding landscape in which he has become hopelessly lost, evoking as great a sense of cosmic horror in this one man’s insignificance in such a vast and empty place as Lovecraft could ever hope to achieve.
Then of course there’s the climax. Ralston’s arm has to go. He has no medical training, an improvised tourniquet, and a cheap stocking-filler knife. The end titles mention the old ‘certain scenes have been altered to heighten dramatic impact’ get-out clause but in this case I really didn’t mind, just as I didn’t mind that the amputation would have been a bit more involved and rather more torturous than what’s depicted on screen. 127 HOURS is an example of this kind of story being told in the right way. It’s based on a true story but it’s presented as an entertainment, with all the suspense and human interest a good telling of such a tale requires. It even has a happy ending that ties in the story to the real life character without becoming too sentimental. Full marks to Danny Boyle.
Posted by John Llewellyn Probert at 6:42 am