The subject of far more vilification than it deserves, Alexandre Aja’s remake of the 1978 Joe Dante pic is so far over the top in every aspect that anyone who takes it seriously just hasn’t got their head on properly. Aja himself has said that he wanted to make an homage to the splatter films he grew up watching during the 1980s and he more than achieves that here.
It’s Spring Break, which according to this film is obviously some kind of public US holiday where young women with large breasts try to fit themselves into the tiniest possible costumes before setting off for any reasonable-sized body of water, where they can be ogled by young men, the collective brain tissue of whom could probably, at a pinch, work out how many breasts a normal woman is meant to have, if they weren’t being distracted by pounding dance music, Eli Roth, and a porn film crew. Probably.
Just before all this wet nudie merrymaking is about to begin there’s an earthquake beneath the lake where our film is set, opening up an ancient chamber filled with massive, vicious, flesh-hungry piranha, who quickly put paid to angler Richard Dreyfuss, introduced pre-credits in a nice nod to his role in JAWS and dead before the title of the film even gets to the screen. Experts are called in who go diving and get eaten, leaving slightly miscast Sheriff Elisabeth Shue and only scientist left alive Adam Scott to take the specimen they’ve captured to screamingly mad fish shop proprietor and apparent expert on everything marine and prehistoric, Christopher Lloyd. Mr Lloyd explains what we’ve already realised and with all the aforementioned scantily clad individuals massing on the lake the scene is set for one of the best scenes of mass carnage in a horror film in recent years. 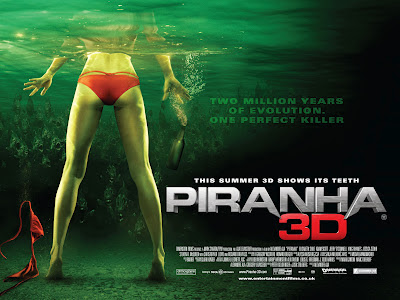 PIRANHA 3D runs slightly less than eighty minutes and manages to cram in more breasts, blood, gore, severed limbs and screaming teenagers than every other film made in 2010 put together. The piranha attacks are well staged and the film is edited to wring maximum suspense out of the numerous cliffhangers that pepper the movie in its final half hour. There are plenty of sight gags, too, and more than anything the film feels like a perverted, ridiculous, adults-only version of a Warner Bros cartoon, with several shots of piranha almost giving knowing winks to the screen. The 3D is used well to complement all the mayhem, with some memorable gags that are probably best witnessed first hand rather than have me spoil the surprise here, or then again perhaps not. Having just rewatched this on DVD with the benefit of a surround sound system I can also testify that the 5.1 mix is excellent as well. I haven’t really mentioned the acting but everyone does what’s expected of them, with some notable overacting by Mr Lloyd and an appropriately cocaine-fuelled over the top turn by Jerry O’Connell as porn director Derrick Jones.
PIRANHA 3D is loads of fun. I’ve now seen it three times and I’m still not tired of it, and if that’s a film-viewing sin - well, I’ve committed worse. It’s a movie for anyone who gets a kick out of the old dangle-your-legs-in-the-water-and-realise-you’re-minus-them gag, the old carrying-someone-injured-out-of-the-water-and-they-fall-apart-in-the-middle gag, and the old The End - or is it? Oh No! - It's Not! gag. The sequel, PIRANHA 3DD, hits cinemas soon. Sadly, it has a different director, and those who disliked the original will no doubt have no interest whatsoever in knowing that encouragingly it’s written by the two chaps who penned the last few SAW sequels and the better than expected THE COLLECTOR. I intend to be in the front row. With my 3D glasses on.
Posted by John Llewellyn Probert at 8:26 am