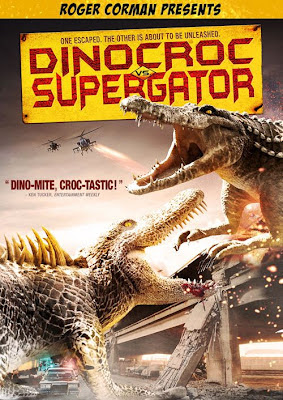 There are quite a few of these Roger Corman-produced monster mashups out there at the moment, all of them apparently produced for the ‘SyFy’ Channel, which makes one wonder: if the TV network in question can’t even spell itself properly anymore, what hope does the discerning viewer have to find anything of quality on it?
Well, DINOCROC VS SUPERGATOR most certainly isn’t anything of quality. It is, however, remarkably undemanding fun if viewed with every part of one’s brain switched off apart from the ‘ten year old monster movie fan’ bit, and to be honest if that part is lacking you’re probably better off giving this one a miss.
Somewhere in Hawaii a group of daft scientists is trying to solve the world’s food shortage by creating a giant mutant crocodile version of a Tyrannosaurus Rex. When, amazingly, this plan fails to alleviate the plight of the starving millions, they create an enormous super alligator with spikes all down its back in case that’s the answer. Obviously possessing more common sense that the entire research team combined these two giant supermutations promptly escape and teach everyone a lesson by eating them.
One of the things I’ve never really understood in poorly thought out monster movies like this is how the attempts to solve the world’s food shortage always seems to result in the creation of not just huge monsters, but huge monsters with enormous appetites. In fact it’s quite remarkable how many people these two genetically altered reptiles get through in the movie’s running time. The monsters often appear from lakes that are far too shallow or from behind trees that are much too small to actually conceal them to chomp on their prey as well, giving the film the feel of one of those old Terry Gilliam Monty Python cartoons.
Arch villain David Carradine employs enigmatic bounty hunter The Cajun to despatch the creatures. The Cajun (that’s how he appears in the end credits) is the sort of chap who catches crocodiles by the rather foolhardy method of dripping his own blood into the water, calling into question Mr Carradine’s claim that this individual is ‘the best’ unless he means ‘the best person who catches monsters using deliberate self-harming methods’ in which case The Cajun probably is, but then how much competition is there going to be for a title like that?
Anyway, our Cajun friend travels from Louisiana to Hawaii, wears exactly the same costume throughout the film, and insists he can operate both his boat and his enormous exploding Dinocrossbow he’s brought along at the same time. He then goes on to prove he can’t and that he needs the help of Girl Villain With Weird Essex Accent to help him. Meanwhile secret agent and appalling shirt-wearing Paul Beaumont (Corey Landis) has hooked up with dyed blonde hair pink lipstick and hotpants-wearing Conservation Officer Cassidy Swanson (Amy Rasimas) to investigate naughty David’s Rubbish Research Facility. 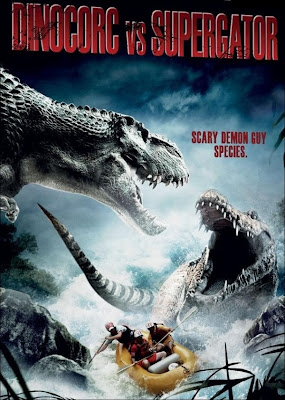 It all ends as stupidly as one could possibly hope for, with Dinocroc and Supergator having a Massive Non-Mammalian Smackdown of low budget CGI proportions. Add in some homo-erotic subtext between the male leads and a strategically placed bath at the end and DINOCROC VS SUPERGATOR is probably the most fun you can find in the £2 bargain bin this week. And to finish off here's a fairly decent poster for the film where unfortunately they've managed to spell the title wrong.
Posted by John Llewellyn Probert at 8:51 am

Email ThisBlogThis!Share to TwitterShare to FacebookShare to Pinterest
Labels: 2010s, Monster Movies, Trapped in the Room With It