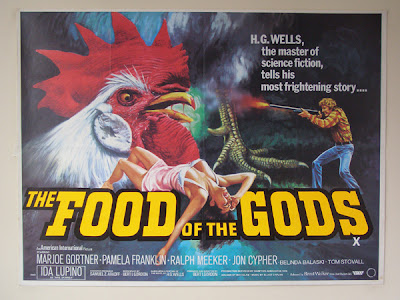 What have we here? Rubber wasps? Giant chickens? Big wiggly caterpillars? All caused by something that looks suspiciously like runny porridge dribbling out of a hole in the ground? And according to the opening titles H G Wells wrote this did he?
Never mind those terrible Alan Birkenshaw Edgar Allan Poe adaptations, or the numerous awful versions of DRACULA that exist - if ever there was a reason for an author to start revolving at speed in his grave Bert I Gordon’s version of THE FOOD OF THE GODS is probably it.
After an awkward voice over gets us past footage that was presumably either lost, never filmed because of budgetary constraints, or possibly mangled by one of Bert’s giant chickens having a hissy fit, we’re off into the wilds of British Columbia with charisma bypass victim and “star” Marjoe Gortner and his lumberjack-shirted hunting buddies. Rather than burst into song they prefer to hunt defenceless animals until one of them breaks rank and suffers from an attack of rubber wasps on strings that bounce around him in search of his hands so he can grab them and shake them a bit. He’s obviously allergic to the rubber because his face swells up. It’s actually a nice makeup job, by the way - House of Mortal Cinema exists to point out the good bits in horror films and now I’ve done that I can go back to trashing this. Marjoe and his chum set off back to get help while meanwhile slurry speeched businessman Ralph Meeker and pretend American accented Pamela Franklin are on their way to the farm where there have been reports of porridge coming out of the ground. Ida Lupino’s been filling up jam jars with the stuff but leaving the tops off so wasps can get at it (Aha!). The caterpillars have got at it too and it’s turned them carnivorous until Ida gives them a good old bashing. Ralph says he wants to own the rights to the magical formula when actually we know he’s just dying to get down to the off licence before they close, whereas poor old Pamela looks as if she just wants to be anywhere else in the world. At all. Marjoe has already been to the farm, where he has fought the Biggest Rubber Chicken Ever and won! Well done that man! When he comes back with his friend there’s a bit more of a problem: pregnant Belinda Balaski and her ineffectual boyfriend want a lift in Marjoe’s jeep, which is simply impossible because the jeep has to do all kinds of important things like being driven through water even though there’s land close by, executing unnecessarily skiddy three point turns and generally being put through all the kinds of manoeuvres one might see in an advertisement for such a product. Oh, and there’s a load of giant rats on the way as well, although all we actually get to see are some rather small rats attacking some even smaller buildings, some of which closely resemble painted bits of cardboard.
The wasps get their nest blown up in a scene which could be retitled Things Only Very Stupid People Do To An Ordinary Wasps’ Nest Because They Will Get Killed and shown as a public information film; the rats get electrocuted and drowned but not before getting alcohol poisoning from eating Mr Meeker; and the rest of the giant chickens live to cluck another day. I’ll resist saying that FOOD OF THE GODS is clucking awful, but it certainly is one of producer-director-screenwriter and creator of (extremely) special visual effects, Bert I Gordon’s lesser efforts. This review has been written to help those who end up trapped in the room with it but if you’re careful this potentially dangerous and hernia-inducing situation can be avoided.
Posted by John Llewellyn Probert at 7:38 pm

Email ThisBlogThis!Share to TwitterShare to FacebookShare to Pinterest
Labels: 1970s, Backwoods USA, Monster Movies, Trapped in the Room With It