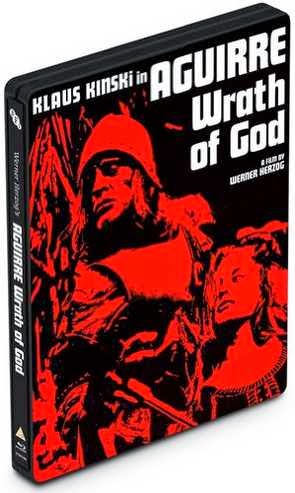 Werner Herzog’s classic up-the-creek-without-a-paddle tale of 16th century Spaniards and their doomed search along the Amazon for the mythical city of Eldorado is more than deserving of a first class upgrade to Blu-ray. Now, courtesy of the BFI, it finally has one - and with plenty of short subjects (and one almost feature length one) as extras.
A group of Spanish conquistadores cross the mountains of Peru and descend with the intention of travelling along the Amazon on rafts, along with cannons, horses and everything else the Spanish nobility travelling with them might need. We the viewers know they’re on to a loser right from the start but it’s only a couple of minutes in, when the camera catches sight of star, frequent Herzog collaborator, and all round uncontrollable loony Klaus Kinski, that we know they’re utterly doomed.


What follows is seriously great (and often seriously hard to believe they actually did it) film-making, as the intrepid group pushes ever onwards, losing men, women and sanity along the way. Except for Klaus of course, who’s already several sandwiches short of the picnic he’s forgotten to bring, and doing his best to scare the hell out of anyone within a hundred mile radius with his contagious madness. By the end he’s chasing monkeys, planning to marry his daughter, and still insisting the few remaining members of his band pilot their hopeless little raft on to inevitable destruction and death.


From its breathtaking opening shot, AGUIRRE is never anything less than mesmerising. We’re with this doomed band of explorers all the way, through death and disease, hallucinations and madness towards the inevitable conclusion, and the film is a fascinating, and almost hypnotic, experience that rewards repeat viewings.
The BFI’s new Blu-ray is just the disc to experience those repeat viewings with. The transfer is brighter and cleaner than the previous Anchor Bay DVD release. Mono audio tracks are available in both German and English, with a 5.1 surround sound option mix in German as well.


Extras include a trailer. and a host of short subjects: The Unprecedented Defence of the Fortress Deutschkreuz (1967), Last Words (1968), and Precautions Against Fanatics (1969). Also included is the weird and hallucinatory feature-length FATA MORGANA (1971). Consisting mainly of wide sweeping vistas of the Sahara, Algiers and Lanzarote before it became a tourist destination, FATA MORGANA looks fantastic on this Blu-ray disc. The commentary track with Herzog and Crispin Glover has been retained from the previous Anchor Bay DVD release of this title, and the AGUIRRE commentary is present and correct as well.

There’s also a stills gallery and an illustrated booklet, all wrapped up in the posh packaging of the steelbook illustrated up at the top. Herzog enthusiasts be warned, however: before you fork out for this you’ll probably want to know that the BFI is bringing out massive Blu-ray (8 discs) and DVD (seven discs) box sets later this year that are intended to feature seventeen Herzog pieces, including both features and short works.

The BFI are releasing Werner Herzog's AGUIRRE, WRATH OF GOD as a limited edition steelbook Blu-ray only on 19th May 2014