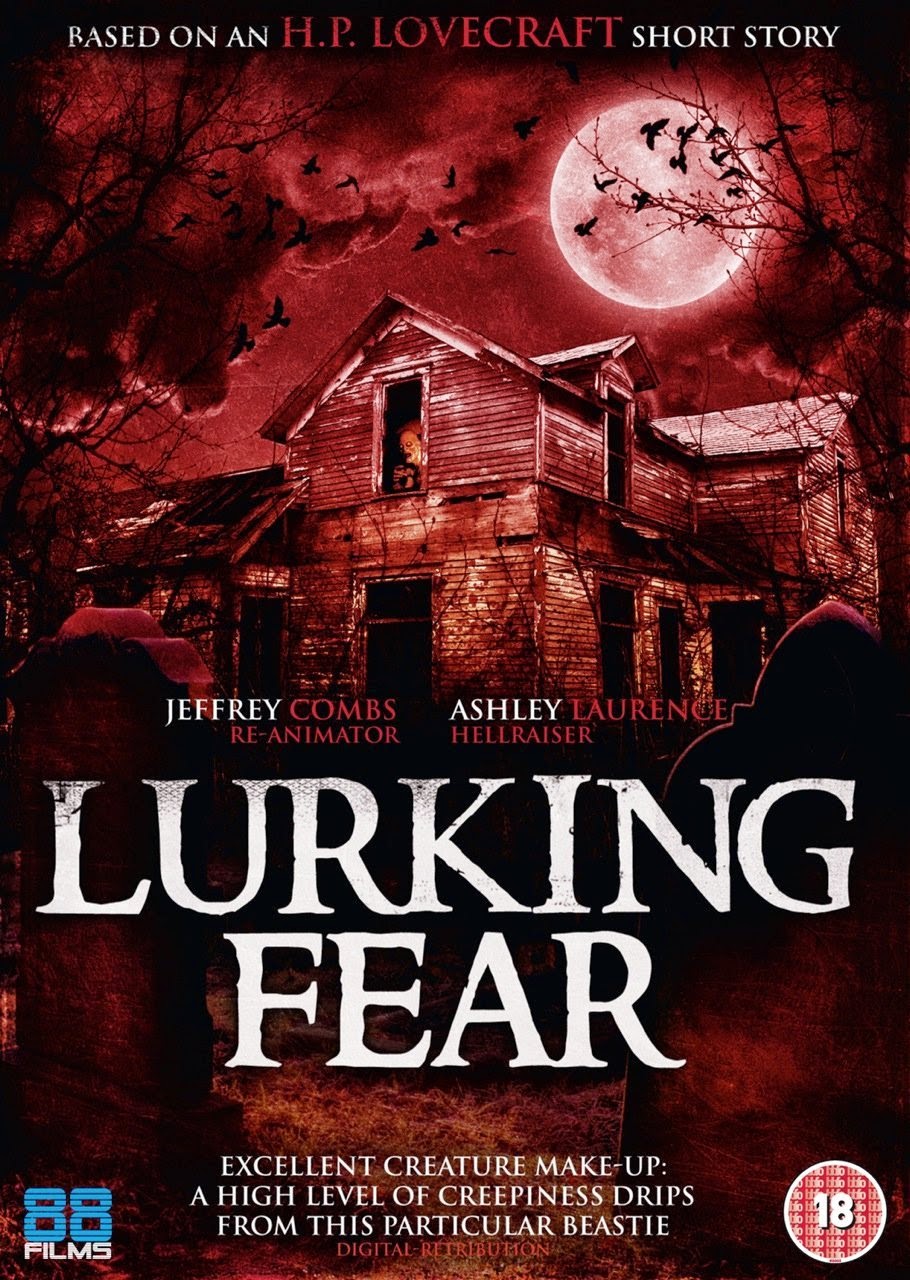 88 Films presents the UK DVD release of yet another back catalogue B-movie bad boy from Charles Band’s Full Moon Productions. As far as Lovecraft adaptations go (yes, it’s another one of those) it’s actually not too bad, but please bear in mind that when I say that I’m placing it on a scale that ranges from REANIMATOR and DAGON at the good end to CHILL and THE UNNAMABLE at the bad.
LURKING FEAR has a great cast (Jon Finch, Jeffrey Combs, Ashley Laurence - billed as Ashley Lauren presumably as the result of some bizarre credit cost cutting exercise - and Vincent Schiavelli to name but most of them), some nicely atmospheric shots courtesy of director C Courtney Joyner and, on occasion, an almost John Carpenter / RIO BRAVO feel to the scenes in which the motley assortment of characters are holed up in a church awaiting the attack of Something Horrible From Out There. That’s the good news. Sadly, my friends, there is a downside to LURKING FEAR, and I have to say that if incoherent plotting and editing, and a music score performed on a Bontempi home organ, are the kinds of things that mar your enjoyment of such fare, you might want to think twice before giving this one a go. 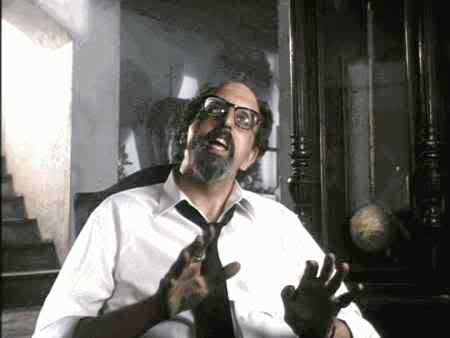 John Martense (Blake Adams) is released from prison and immediately goes to visit old crime buddy Skelton Knaggs (Vincent Schiavelli) at his funeral parlour. While those of us who obsess about this kind of thing wonder how many members of this movie’s intended 1994 home video audience would have actually got that gag (Knaggs was a character actor of the 1930s-1950s who specialised in playing sinister and weird bit parts) Schiavelli explains that he wants Martense to go to the creepy old rotting town of Leffert’s Corners (actually a creepy old town in Romania and a splendid location) and dig up a body he stuffed with money before burying it.
Off goes Martense and in comes Jon Finch with his gang and his partial dubbing that usually tends to occur when he’s offscreen. The money actually belongs to Finch and he wants it back so, after disposing of Schiavelli, they all troop off to Leffert’s Corners as well. 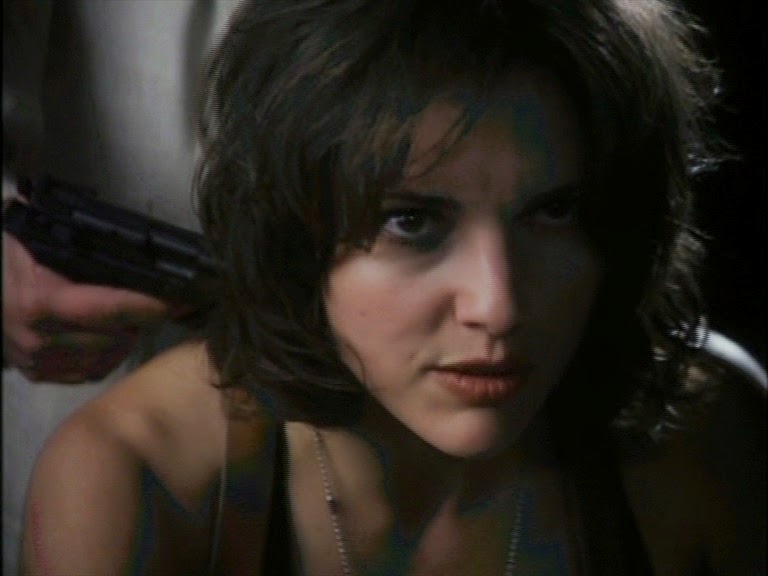 So far so good. The problem with LURKING FEAR is that something is going on in Leffert’s Corners. Something that has already involved Ashley Lauren(ce) in a prologue that feels more like the end of a movie, and is currently involving her, chain-smoking and chain-drinking doctor Jeffrey Combs, a preacher (Paul Mantee), a pregnant lady, a church, something very badly boarded up that lives under the church floorboards, and the necessity for a large quantity of gelignite to be used to blow up the cemetery. This is where the film really falls down, as that’s about as much as is explained. Everyone converges on the church. The monsters try to kill them. In some cases they succeed. LURKING FEAR is all over in just over 70 minutes and to be honest it really needs another 20 minutes of explanation as to just what is meant to have been going on. And that’s a real shame because with a bit of care and attention LURKING FEAR could actually have been very good indeed. The cast are excellent, the locations are creepy, and the production design boasts a style that’s reminiscent in parts of good Hammer. 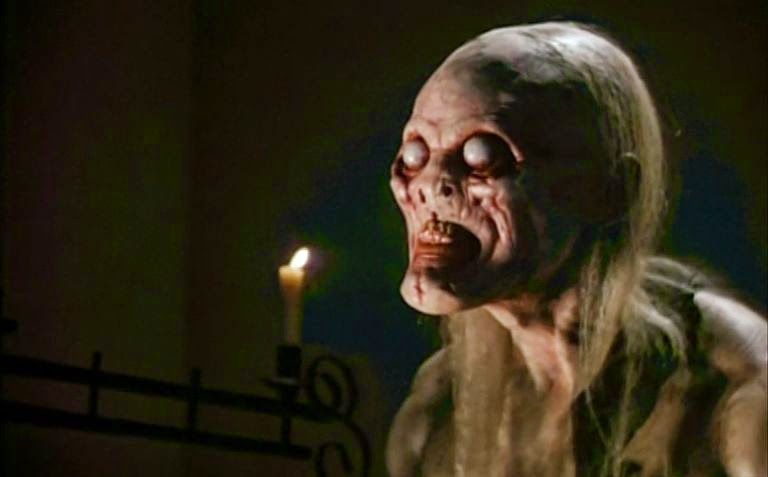 88 Films’ DVD is in 4:3 aspect which looks like the frame ratio it was filmed in. Quite a few scenes would actually benefit from being in 2.35:1 so if you do decide to take the plunge with this one, even more fun can probably be had from viewing it through a letterbox-shaped piece of cardboard. There’s a making of that’s very superficial and doesn't deal with any of the obvious problems this production must have encountered. Oh, and the transfer isn't terribly good - at least, the disc I previewed wasn’t. In fact the clips they show in the making of look a lot better. Add in the usual 88 Trashy Trailer Park reel & I’d certainly think I’d have got value for money forking out for this. As always, readers are encouraged to make of that what they will.