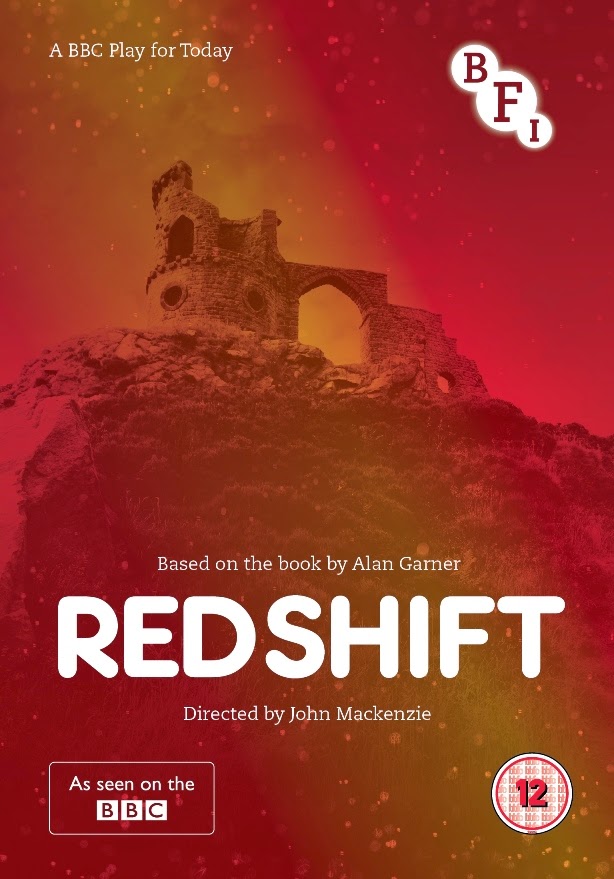 The BFI continues its invaluable and highly praiseworthy practice of releasing to disc classic television that pretty much nobody has seen since its initial broadcast with this Play for Today offering from 1978. RED SHIFT was adapted by Alan Garner from his novel of the same title, and directed by John MacKenzie, who also gave us the classic APACHES in the same year and would go on to direct THE LONG GOOD FRIDAY. Nothing else in his filmography is quite as ambitious as this, though. 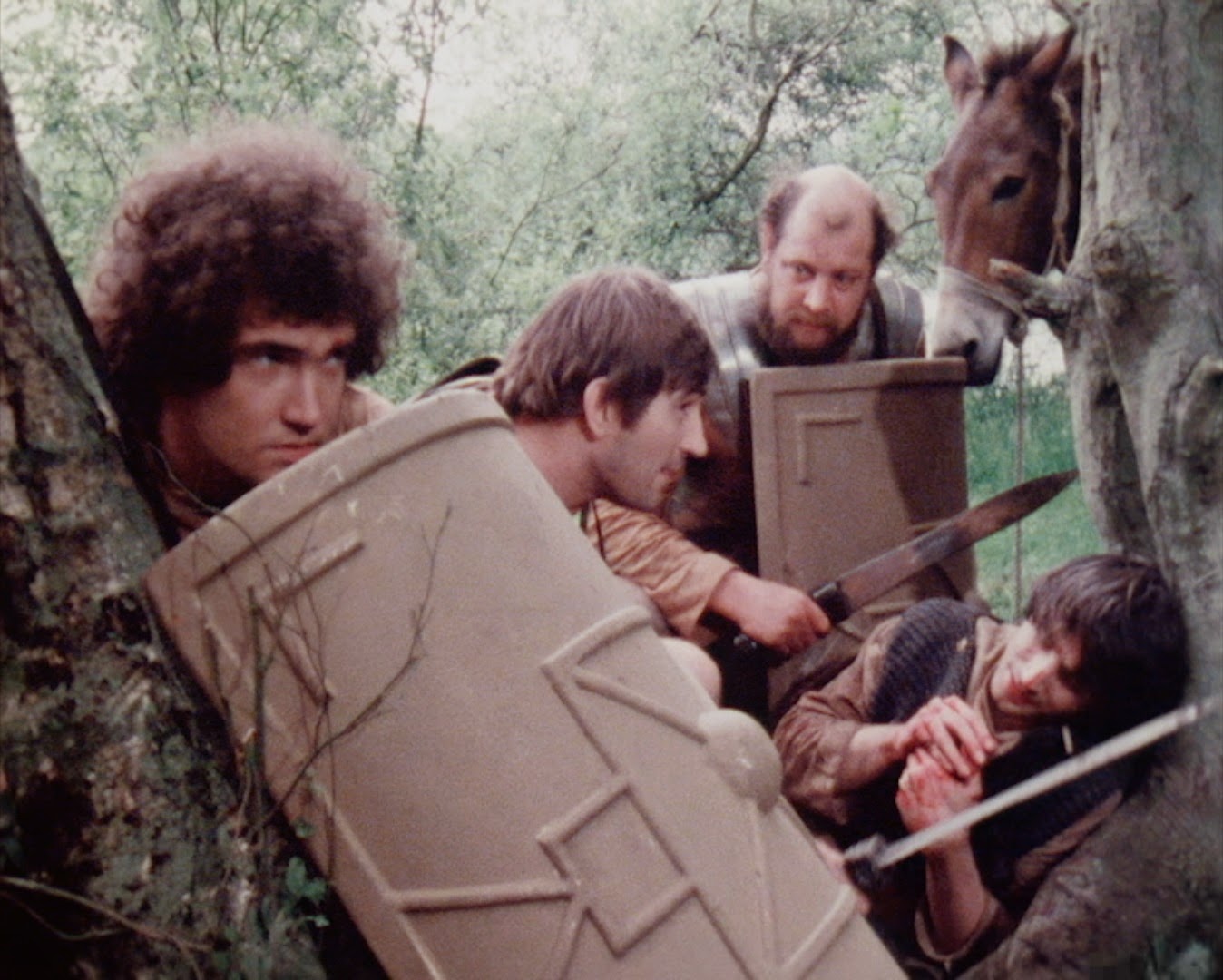 In three separate timelines - Roman, civil war and 'modern day' 1978 we are told three different but nevertheless inter-related stories, linked by their location (Mow Cop in South Cheshire) and a mysterious stone axe head that has a part to play in each. In 1978 Tom (Stephen Petcher) is preparing for his girlfriend Jan (Lesley Dunlop) to leave for London where she is going to train to be a nurse. They resolve to meet up at weekends, despite the objections of Tom's parents (Bernard Gallagher and Stella Tanner) to the relationship. Their plans go ahead, but things don't work out quite how either of them are expecting. 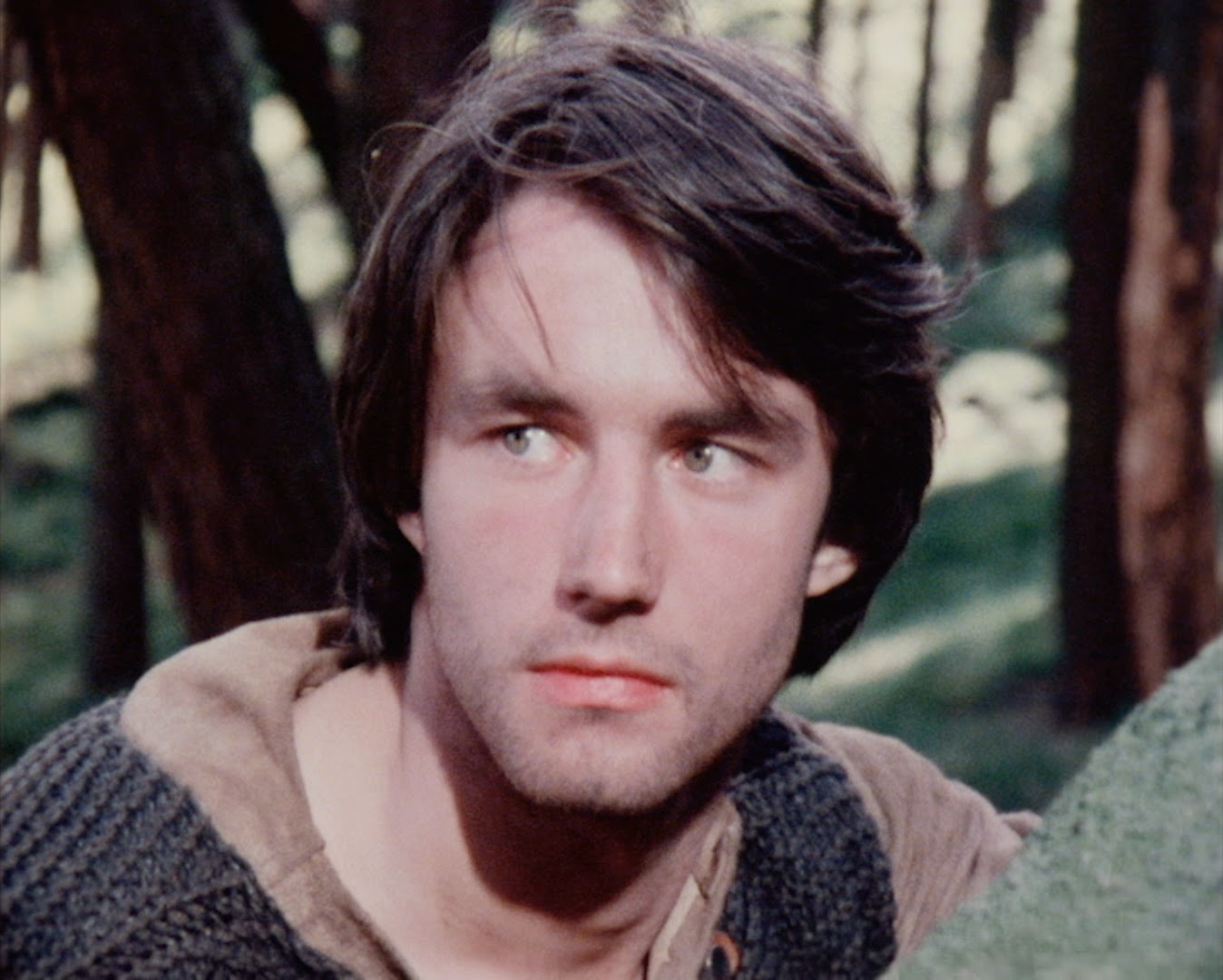 Meanwhile in Roman Britain, Macey (Andrew Byatt) has become attached to a couple of Roman legionaries (Ken Hutchison and Anthony Langdon). Driven to killing frenzies by the stone axe head in his possession, he begins to spend time with their female prisoner (Veronica Quilligan), a young woman who has been hamstrung for the purposes of the legionaries' pleasure and who may possess magical powers. In the seventeenth century, Thomas Rowley (Charles Bolton) is plagued by visions as he and his community, led by John Fowler (James Hazeldine) barricade themselves in a local church to withstand an attack by the royalists. 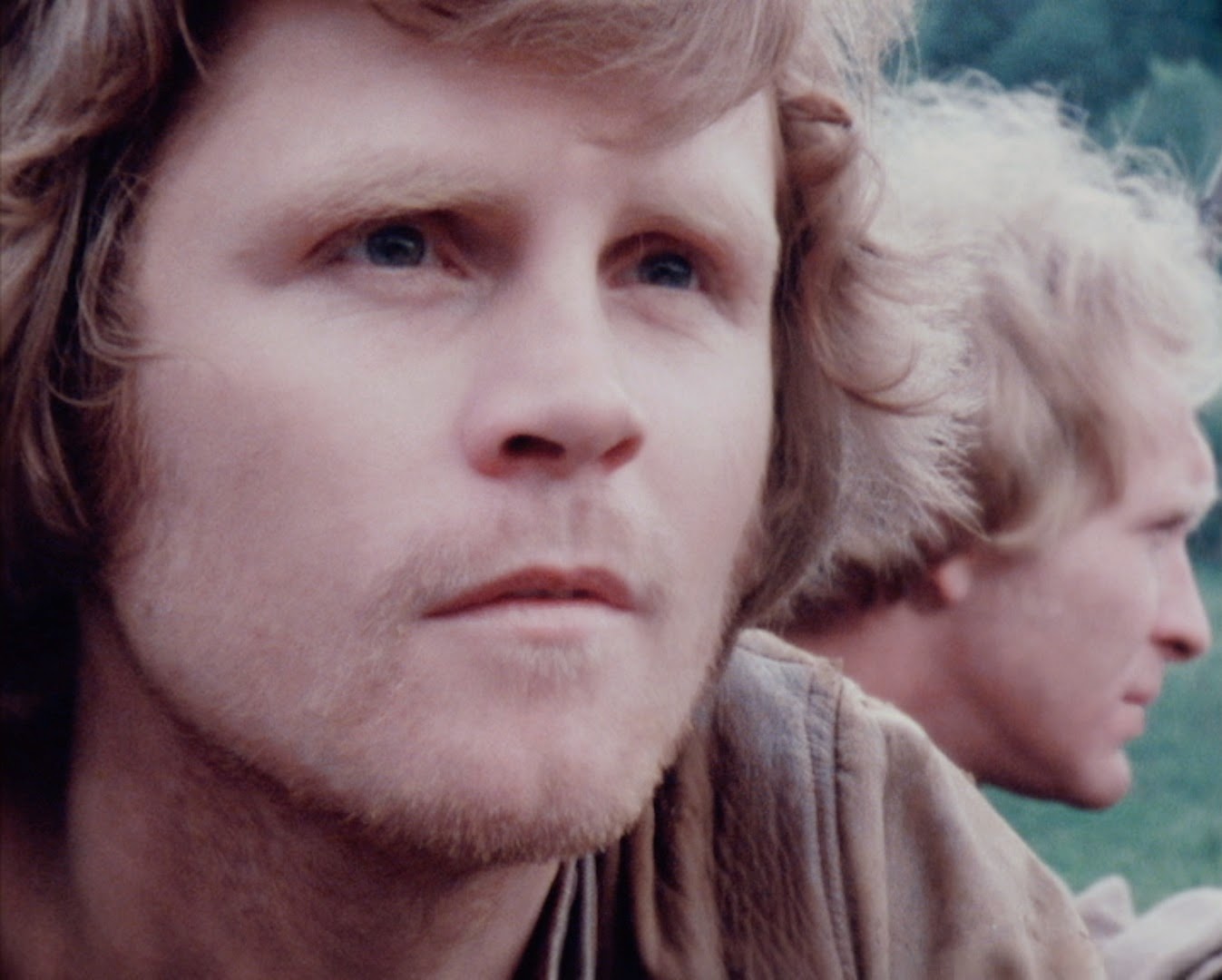 The back of the DVD box for RED SHIFT says that it's from the 'Golden Age of British television' and I have to admit, sadly, that I think that's true. It's pretty much impossible to imagine anyone these days making such a complex and ambitious work for British prime time television viewing and achieving such a successful result. I'll admit that by the time RED SHIFT had finished I still wasn't really sure what it was all meant to be about but I haven't been able to stop thinking about it since. Alan Garner, a writer of considerable literary merit, had had his work adapted for television before (THE OWL SERVICE) and after (ELIDOR) but it was rare for his work to be filmed with the intention of it having a principally adult audience (the PLAY FOR TODAY strand it was a part of was always broadcast after the Nine O'Clock News). Garner wrote the script himself and it's excellent. The dialogue is crisp and punchy and, needless to say, I can't imagine anyone else making a better job of adapting his novel. John MacKenzie's direction is very good as well. Fans of WITCHFINDER GENERAL and BLOOD ON SATAN'S CLAW will be delighted by the feel of the scenes set in the seventeenth century, and the Roman sequence has probably the strongest sense of Britain as a land of magic and pagan power. 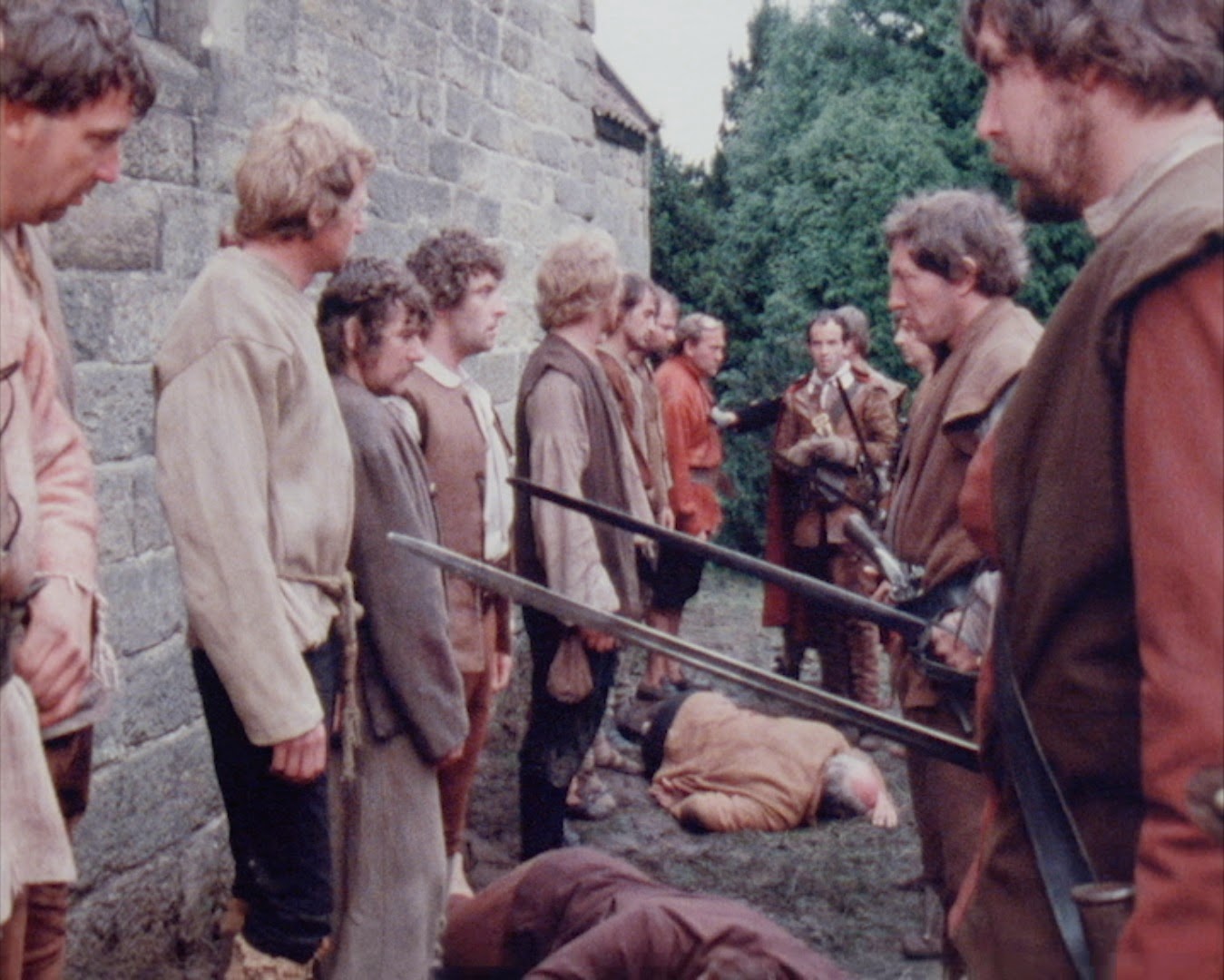 The BFI's DVD looks as good as a British TV production of this period possibly could. There are a number of extras, most fascinating of which is probably One Pair of Eyes: Alan Garner - All Systems Go, a documentary about Alan Garner from 1972 in which the writer himself takes us through his daily routine and his upbringing (with the aid of an ASYLUM-era Robert Powell, as they went to the same school). There's also an interview with the 1st assistant director and editor of RED SHIFT, and a short twenty minute film narrated by Michael Hordern about sites to see in Cheshire. This is another marvellous addition to the BFI's library of previously unreleased television classics and they cannot be praised highly enough for bringing works like this back into the public eye. More please!

Posted by John Llewellyn Probert at 6:43 am