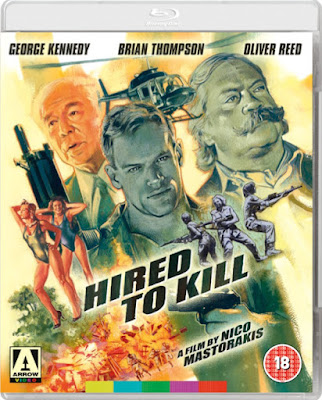 Nico Mastorakis’ ‘action thriller’, and a film most will probably have never heard of, gets a dual format Blu-ray and DVD release courtesy of Arrow Films. THE ZERO BOYS it isn’t, nor is it ISLAND OF DEATH (both already on the Arrow label) and we should be grateful for that.

Or should we? Whereas ISLAND turned the sleaze factor up to eleven, and ZERO turned the suspense and action factors down to about that level by the end, HIRED TO KILL is a different world of silly altogether.
Brian Thompson (a recognisable heavy from numerous television shows like BUFFY and X FILES) is our mercenary hero, employed by orange juice-sipping George Kennedy to rescue The Brother, (Jose Ferrer, who’s in this for about 30 seconds and therefore presumably doesn’t deserve an actual name), deposed leader of a tiny made-up country from the prison where he has been incarcerated by evil, despotic, drunk and heavily moustached Oliver Reed.

To achieve this not inconsiderable task, George assures Brian that the only way it can be done is for big muscly Brian to pose as a fashion designer and take six models along with him who are actually deadly assassins. Oh, and he’s going to have to train them himself. Cue a round-the-world recruitment montage followed by the only training montage ever to consist of military tactics, makeup application, assault courses, catwalk posing, all topped off by the girls machine-gunning giant cardboard cut-outs of Oliver Reed in full military regalia. I don’t think we ever actually leave Nico Mastorakis’ house for any of this, by the way.

With this sort of setup, HIRED TO KILL is actually disappointingly low on action, or decent action at least. But is IS immensely entertaining. As well as everything above we witness the sight of Brian seducing Oliver Reed with a great big onscreen kiss, some impressive (and beautiful) Greek locations, and a storyline that will have you scratching your head a bit as the story nears its end.

Arrow’s transfer looks far too good for a load of (entertaining) old rubbish like this, but if you’re a fan of HIRED TO KILL you’re going to love it. Extras include two twenty minute interviews - one with star Brian Thompson and another with Nico Mastorakis where he talks about the cast and the difficulties he had working with poor old Oliver Reed (it was one of the last films the mighty British actor made and he does look terribly rough). There’s also a commentary track with editor Barry Zetlin, which is more of a career overview than specific to the film.

HIRED TO KILL -Nico Mastorakis' attempt at the action genre - is out on DVD and Blu-ray in a dual format edition from Arrow on Monday 16th May
Posted by John Llewellyn Probert at 8:54 am

Email ThisBlogThis!Share to TwitterShare to FacebookShare to Pinterest
Labels: 1990s, Nico Mastorakis, Trapped in the Room With It