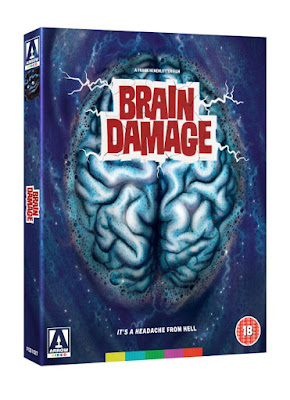 Frank Henenlotter’s second feature film (after 1982’s BASKET CASE) gets the special edition dual format DVD & Blu-ray treatment from Arrow, in another of these releases that, back in the late 1980s, we would have fallen off our chairs if we had been told you would one day be able to own a package like this.

The Aylmer (or Elmer as he is ‘affectionately’ known) is a smiley, winky, worm-shaped parasite that resembles what might result from an unholy union between William Castle’s THE TINGLER and one of David Cronenberg’s venereal parasites from SHIVERS. He’s been around for centuries, which is surprising considering how many brains he needs to eat. Of course, he does have a human servant to help him, whom he rewards with injections of a substance that induces euphoric hallucinations.


At the start of BRAIN DAMAGE, Elmer escapes from the elderly couple who have ‘adopted’ him and finds a new ‘owner’ in the form of Brian (Rick Herbst). Brian likes Elmer’s drug but he soon gets tired of having to find victims for Elmer to eat the brains of. Trying to go cold turkey after a few shots of Elmer’s joy juice leads to unfortunate side effects for Brian, however, including a scene where he hallucinates pulling his own brain out. Meanwhile, the elderly couple are in hot pursuit because they want Elmer and his happy drug back from themselves.

Embracing the same kind of lurid trash aesthetic as the films of John Waters, but with an emphasis on monsters rather than deviant behaviour (although there tends to be a fair bit of that too), Frank Henenlotter’s movies succeed mainly on their bouncy charm and over the top enthusiasm for material that, if it were shot straight, would be unbearable on so many levels. Here, though, Elmer (voiced by John Zacherle, a US television personality virtually unknown in the UK) is lots of fun, his outrageous antics are lots of fun, and while there’s a lot of shouting and screaming and brains pulsating on a dinner plate, it’s all very much in the style of a (very twisted)  Warner Bros. cartoon brought to life.

Arrow’s disc contains enough extras to satiate the needs of any BRAIN DAMAGE fan. Henenlotter himself provides a very chatty commentary track, there’s a brand new making of, a piece on Gabe Bartalos’ effects, the animation of Elmer, locations for the movie, a Henenlotter Q&A, and an interview with assistant editor Karen Ogle.

Bygone Behemoth is an animated short film by Harry Chaskin featuring John Zacherle, and Tasty Memories is an interview with BRAIN DAMAGE superfan Adam Skinner who does indeed have a lot of memorabilia. If you run this through to the end the menu switches to bonus music tracks Adam put together for a BRAIN DAMAGE tribute album.

You also get a reversible sleeve, a limited edition artwork card, a collector’s booklet with Michael Gingold writing about the film, and if you buy BRAIN DAMAGE from the Arrow store, Diabolik DVD or the Texas Frightmare weekend 2017 you also get an exclusive Elmer enamel pin badge.


Arrow are releasing Frank Henelotter's BRAIN DAMAGE in a dual format special edition on Monday 8th May 2017
Posted by John Llewellyn Probert at 9:08 am