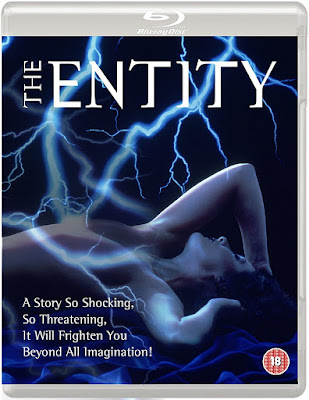 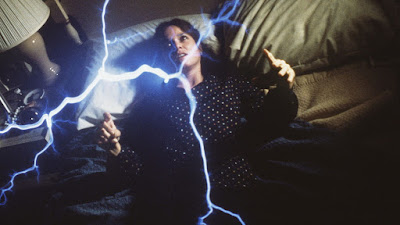 Barbara Hershey is Carla Moran, a single mother of three who is just getting by. Her life takes a turn for the worse (and the paranormal) when she starts to be repeatedly attacked and / or raped by an invisible entity. Visits to the toughest psychiatrist on the block (“I’m gonna nail you two guys!”) Phil Sneiderman (Ron Silver) fail to convince her she’s going mad, and it’s only when she bumps into two parapsychologists at a bookshop that she finds people willing to believe her and, more importantly, willing to try and trap her attacker in a massive block of frozen helium in the gym at the local university. 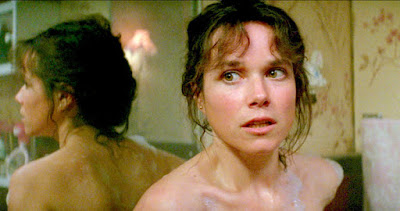 One of those supposedly-based-on-a-true-story-a-bit-well-possibly projects, THE ENTITY rode the crest of the ‘we-had-a-true-paranormal-haunting-type-thing-honest’ wave made popular by THE AMITYVILLE HORROR (both book and film). Whereas Stuart Rosenberg’s picture was firmly rooted in good old exploitation tactics, THE ENTITY seems to be trying remarkably hard to be anything but. There’s very little in the way of ghostly atmosphere, over the top melodrama, or (thankfully) titillation in the scenes of Hershey being attacked (not that you’d think that from the box art).

This does, however, lead to a rather flat-feeling film, despite Mr Furie’s frequent Batman camera angles and overuse of split dioptre shots. Hershey is great, however, and Charles Bernstein does a fine job with the music as well - check out the bonus tracks on Intrada’s soundtrack CD if you can to see how he layered the synth lines for the attack scenes. Sadly, Eureka’s Blu-ray doesn’t have anything as useful in terms of extras - you get a trailer but that’s it. The print does look very nice, though. 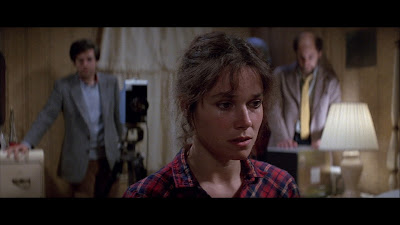 Sidney J Furie’s THE ENTITY is out on Blu-ray from Eureka on 15th May 2017
Posted by John Llewellyn Probert at 8:57 am