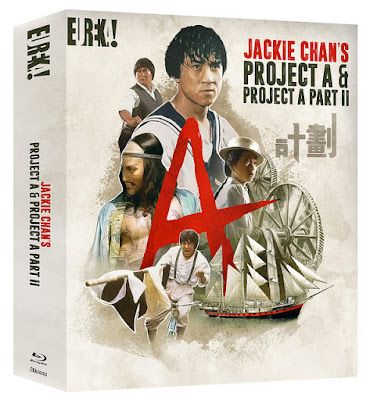 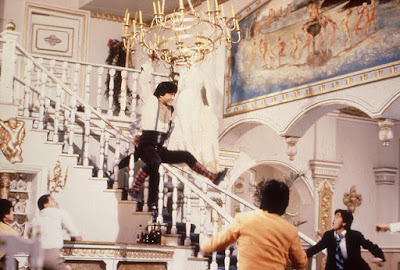 PROJECT A sounds like it might be science fiction, or possibly a political thriller, but in fact it's a pirate adventure set at the turn of the century. (The title was apparently Chan's attempt to stop other studios copying him before his film had been released). 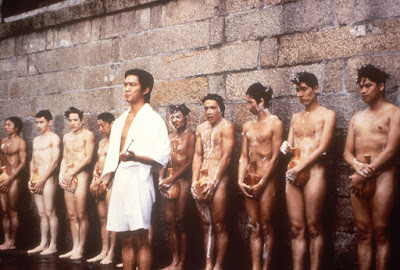 This time, our Jackie is Sergeant Dragon Ma, a member of the Hong Kong Marine Police Force. Pirates have been attacking and raiding ships in the area and it's up to our hero, with the help of Sammo Hung, to get into as many highly (and possibly sometimes dangerously) choreographed fight scenes as possible. For those of you interested in Chan's stunts, this is the one where he pays tribute to silent comedian Harold Lloyd by hanging from a clock before plummeting (several times in the out-takes) to the ground, without the aid of a net but with the aid of some canopies to break his fall. 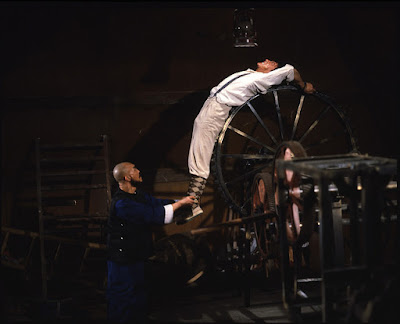 PROJECT A PART II followed four years later. Dragon Ma is still busy up against pirates, again in lengthy, sometimes breathtakingly choreographed fight scenes. This time we get a tribute to the Marx Brothers' A NIGHT AT THE OPERA and perhaps even more famously, a tribute to the classic scene in Buster Keaton's STEAMBOAT BILL JR where a house falls onto our protagonist and he escapes unscathed. 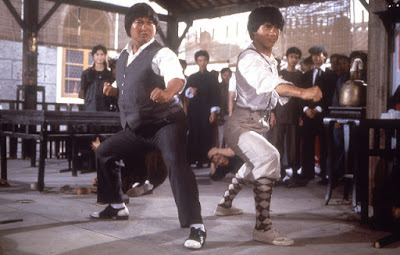 Eureka's transfers for PROJECT A PARTS I & II are absolutely gorgeous - bright and colourful, they've done a very fine job indeed with these 2K restorations. Both films have both Cantonese & English dialogue tracks. There's an absolute stack of interviews (ten altogether), some of them new and some archival. You also get an archival featurette, Jackie's introduction to the film for the lunar new year 1984, behind the scenes footage, alternate out-takes from the Japanese version of PROJECT A, behind the scenes footage and deleted scenes. Exclusive to the box set are booklets for each film, featuring both new and archival material.

Jackie Chan's PROJECT A & PROJECT A PART II are out in a limited edition set now.
Posted by John Llewellyn Probert at 8:00 am