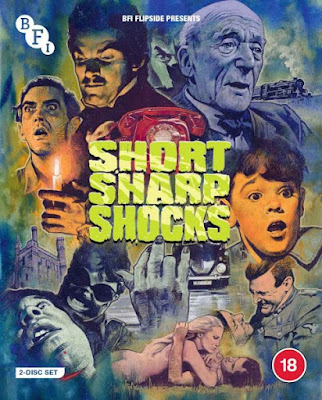 If you went to the cinema in the UK up to the mid 1980s you may well have ended up watching a British short film before the main picture. This was because of a ruling that a proportion of every cinema programme shown in the UK had to include British content. It was funded by a levy on cinema tickets and the intention was to help fund British movie-making and keep the industry going. It all came to an end in the 1980s when the Thatcher government stopped it.  Many of the films were of the 'Why I Love Birmingham' (thanks Telly Savalas!) or 'Billy's Time Bike' variety, but some were weird, a few were strange and every now and then you'd get something that was outright horror. For an excellent summation of the British short horror film I'd recommend Darrell Buxton's monograph that also goes by the title Short Sharp Shocks. The very last short film I remember seeing at the cinema was Martin Holland's SUPERHERO (1982) starring Koo Stark, which played as the UK support to FRIDAY THE 13TH PART V A NEW BEGINNING during its release in October 1985. SUPERHERO isn't on this new set from the BFI (because it took place mainly in a comics shop and wasn't horror at all) but a whole collection of interesting and disturbing shorts are. So let's see what we've got here:

These are less short films and more 'Jackanory-style' talking-to-camera pieces as author Algernon Blackwood tells an imagined audience two of his spooky stories within the comfort of his (presumably studio) study. It's rare to have any kind of record of authors of this period performing their own work and these provide a valuable record of one of the genre's most important practitioners doing just that.

Welsh acting god Stanley Baker plays Edgar Allan Poe, reciting the title story within the confines of a gloomy garret and filmed in crackly black and white. Thought lost for many years, this twenty minute piece is this result of restoration work on a print from a private collection.

Terence Alexander boards a train and recognises a nun who helped him escape the Nazis under similar circumstances during the war in this rather slight tale directed by 'Zichy' (first name actually Theodore). Easily the least of the films on the set so if this is one of the first you watch don't worry, they do get better.

And this one *is* better in a kind of early proto-Twilight Zone / Amicus kind of way. Why is painter David obsessed with the portrait he painted of matador Manuel during a trip to Spain? Is it because Manuel hated it, died as a result of bull-fighting injuries but before he did swore he would have revenge on David for depicting him in such an unflattering manner? Most notable to BritHorror fans for appearances by Sandra Dorne (Richard Gordon's 1963 DEVIL DOLL) as the one who causes all the trouble and Hammer actress Yvonne Romain (billed here as Yvonne Warren) who plays Manuel's sister.

Extras on disc one include a a couple of interviews with Kate Lees of Adelphi Films,  one on the history of the company and another about the rescue of THE TELL-TALE HEART.

Graham Baird (Alexis Kanner, best known for appearing in the last three episodes of The Prisoner) wakes up in a strange bed wearing strange clothes. He gradually starts to piece together what happened over the last twenty four hours. Or does he? By the end of this one I still wasn't sure exactly what had happened. This one boasts an interesting cast, including Justine Lord who was in The Prisoner episode The Girl Who Was Death along with Kanner, Robert Lang, and Yootha Joyce as a prostitute.

When lorry driver Jack Piper (Ben Howard, who plays the man who wants to rob Peter Cushing at the end of FROM BEYOND THE GRAVE) sees a naked woman on horseback on a lonely country road, his relentless pursuit of her leads him into the world of the supernatural. The subject matter of THE SEX VICTIMS would have benefitted from less perfunctory direction (imagine what Jose Larraz could have done with this idea) but nevertheless there's the feel of Celtic myth or Greek tragedy to this one, which despite an intrusive and rather annoying 1970s music score still manages to evoke a sense of adult fairy tale in its proceedings. Felicity Devonshire (from the opening titles of Graham Stark's THE MAGNIFICENT SEVEN DEADLY SINS) plays the girl and there are roles for Jane Cardew (THE FLESH AND BLOOD SHOW) and Alun Armstrong (from far more reputable stuff than any of the above).

Barbara (Julie Peasgood from HOUSE OF THE LONG SHADOWS) and her boyfriend Tony (Gene Foad) spend a sunny afternoon having a picnic near a lake where a man killed his entire family before disappearing. As with his 1981 Machenesque feature length horror THE APPOINTMENT, director Lindsey C Vickers manages to conjure a gradually mounting sense of dread using virtually no resources at all with this one. When's THE APPOINTMENT going to get the BFI flipside treatment, then?

After working for cult UK directors Pete Walker and Norman J Warren, screenwriter David McGillivray's first project post 1978's TERROR was this short SF-horror crossover. In a near-future a soldier at a specialist training facility (Edward Kalinski from FRIGHTMARE) is sent on a special mission. But when he is almost killed he finds it difficult to obtain help. Finally the truth behind why he was sent into the field is revealed.

Disc Two's extras include a lengthy interview with the irrepressible David McGillivrary who offers an engaging career overview with elements that will be familiar to many, especially those who have read his book (he leaves out the spicier bits, naturally). There's also an interview with Julie Peasgood (18 minutes) and another with Peter Shillingford covering his career in British cinema as both cinematographer and producer. Finally there are image galleries for TELL-TALE HEART, THE LAKE and THE ERRAND, script galleries for THE LAKE and THE ERRAND and the original short story of the latter. The first pressing also comes with a booklet featuring new writing on the films from Vic Pratt, William Fowler and Josephine Botting.