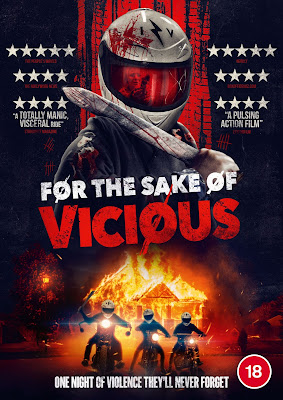 Readers of a certain age will remember REVENGE, a Sidney Hayers film from 1971 in which James Booth and Joan Collins play a pub landlord and his wife who trap the suspected murderer (Kenneth Griffith) of their daughter in their cellar and they proceed to beat him senseless while debating killing him. The answer to whether he's actually guilty or not of his crime is something you don't learn until the end.

The opening of FOR THE SAKE OF VICIOUS echoes Hayers' film, only this time with a nurse (Lora Burke) coming home to find a man she vaguely knows (Nick Smyth) torturing her landlord (Colin Paradine) who has walked free from being accused of the rape of the man's daughter. She cuts the landlord free and he phones someone who he claims will "sort everything out".

Then the film goes really mental.

And that's honestly the best way to describe the rest of FOR THE SAKE OF VICIOUS, which becomes an all-out blood-drenched assault as numerous masked men descend on the house with the seeming intention of killing all three of them.

It's terrific, riveting, gruelling, action-packed stuff that's all the more impressive for taking place in the cramped surroundings of an ordinary suburban house. For those familiar with festival favourites of the last couple of years it's a bit like if Joe Begos directed WHY DON'T YOU JUST DIE? and once the action starts it never lets up. Almost Italian in the way it thrills to its increasingly frenetic pacing at the expense of backstory (there's very little and I'm still not quite sure if everything was adequately explained) FOR THE SAKE OF VICIOUS shows it's still possible to make kinetic, rollercoaster crime movies with the kind of energy that leaves you feeling exhausted and wrung out by the end by using only limited resources. If there's a better movie of this type released this year I'll be surprised. Directors Gabriel Carrer and Reese Eveneshen are obviously talents to be watched. Another winner from Signature.

Gabriel Carrer and Reese Eveneshen's FOR THE SAKE OF VICIOUS is getting a DVD and Digital release from Signature Entertainment on Monday 19th April 2021.

Posted by John Llewellyn Probert at 8:39 am