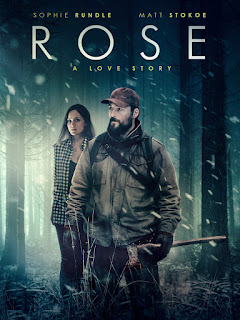 Sam (Matt Stokoe, who also wrote the screenplay) lives with his wife Rose (Sophie Rundle) in an isolated cottage in the middle of a forest. Every morning Sam collects the rabbits that have been caught in the traps he has set overnight. Rose never ventures outside. Before cooking his meal which he supplements with vegetables from their garden he spends a short while in a room lit with ultra-violet light while leeches suck the blood from his legs. The fattened, ground up leeches are what Rose eats.

Sam has set up a system to have supplies brought from the local village but the latest delivery goes wrong. Then Amber (Olive Gray) wanders into one of his traps while on the run and has to be taken back to the cottage, where Rose befriends her. And little by little the tiny world Rose & Sam have come to inhabit begins to fall apart.

Fans of classic EuroHorrors will find themselves reminded of Jean Rollin's 1982 LA MORTE VIVANTE (relationship with a girl who lives on blood) and even dear old Norman J Warren's 1977 PREY (a long slow buildup involving only a few characters culminating in a shattering finale). Jennifer Sheridan's film dispenses with any exploitation trappings and concentrates on the relationship between the two lead characters. It's never explicitly stated what's wrong with Rose and personally I like the idea that Sam was once a top scientist who experimented on his wife and it went horribly wrong, but there are plenty of other explanations to ponder.

Shot in Powys, which has always done a fine job of representing the middle of nowhere, ROSE: A LOVE STORY is an example of the quiet horror that British cinema (and in the 1970s British television especially) does so well. It's carefully paced, gentle and tender in its approach to its subject matter and the result is a moving, thoughtful piece that's highly recommended.

Jennifer Sheridan's ROSE: A LOVE STORY is out on digital from Signature Entertainment on Monday 5th April 2021

Posted by John Llewellyn Probert at 9:06 am