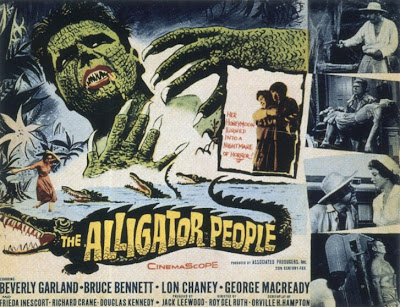 The formula of Twentieth Century Fox, Cinemascope, the late 1950s and monsters should, when mixed in the right proportions, yield Kurt Neumann’s fabulously successful THE FLY. If you get the mixture a bit wrong, however, you might just end up with THE ALLIGATOR PEOPLE, another movie from the same era and the same company but lacking so many of the factors that made THE FLY a success.

After an opening title sequence over suitably atmospheric swampland we cut to a doctor’s office where Dr Lorimer is hypnotising pretty nurse Beverly Garland with the aid of intravenous drugs, quite possibly fulfilling the dreams of many cinemagoing men of dubious moral virtue of the time. This medication seems to induce a state of wild hallucination where she envisages herself in a rather sub-par monster movie. But oh no – actually it’s a flashback! Beverly’s just got married to Paul Webster (Richard Crane) but no sooner have they got on the train to begin their honeymoon than he receives a telegram and sooner than you can say ‘it’s your ex-wife you’re actually still married to’ he’s jumped the train and disappeared. Beverly tracks him down in the heart of Louisiana swamp country where mad scientist George Macready has been injecting accident victims with a serum from alligators that allows them to grow new limbs. It also makes them go all scaly and turn green – probably, as this is in black and white. George has a cobalt bomb and the means to use it – a complex looking piece of equipment that must have cost a bit as it gets demonstrated frequently during the film’s brief running time of 74 minutes. Because Paul turning into an alligator and the constant threat of radiation poisoning isn’t enough Lon Chaney Junior is also stumbling around in a torn seersucker suit and boasting a hook instead of a right hand due to a previous alligator attack, allowing him to wax lyrical at length about how much he hates them ‘gators and would spend the rest of his life killing them if he could. In fact he’s actually on hand (sorry) to molest Beverly after she’s lost a fair amount of her skirt in the swamp, which is probably about all the titillation a film like this was allowed back then. Presumably that and the drugging was enough to satisfy a certain part of the audience demographic. The alligators for Macready’s work, and the mutilated results of his experiments, are all captured and / or restrained by men who look as if they should be extras in a particularly non-heterosexual remake of ‘On The Town’, the tightness of their white T-shirts only matched by the severity of their haircuts.
It all ends badly of course. Despite still being able to play the piano and thus opening up a whole new possible market in Alligator Music Recitals, Paul gets an Extra Big dose of radiation and ends up with a properly snouty head filled with big teeth. Off he goes into the bayou pursued by Beverly, where before either of them can stop to wonder at this reversal of a classic horror film trope they both demonstrate a quite uncanny ability  to fall over a lot before Paul falls one time to many and ends up in the swamp. Where he sinks. The End. Oh, except we get to see nurse Beverly again just so we can be reassured that the two doctors who drugged her haven’t been using the film we’ve just seen as a distraction while they cart her off to be sold to white slave traders or anything like that.
One for completists, as is director Roy del Ruth’s previous PHANTOM OF THE RUE MORGUE, THE ALLIGATOR PEOPLE does have a few nice moments, namely that of Garland’s arrival at the deserted Louisiana railway station and the piano-playing alligator man, even if overall it’s a bit slow considering its brief running time. The science is the usual utter rubbish with a few words thrown in from medical texts but for fans of a certain type of movie (you know you are, and I’m certainly one) the ending has to be watched at least once.
Posted by John Llewellyn Probert at 4:18 am