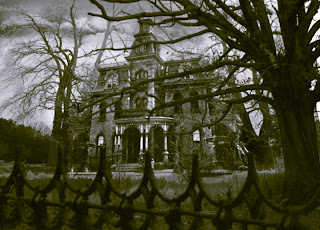 I keep intending to review some more mainstream (or at least accessible) fare on this site but then delicious obscurities like this keep coming my way. THE HOSPICE was made in 1987 by HTV West as part of a co-production deal with a European company to make a series called 'Night Voices', and is an adaptation of the Robert Aickman story of the same name. Despite some of them being included in the Fontana Books of Great Ghost Stories that he edited, Aickman's stories are difficult to classify and certainly deserve the label 'strange'. THE HOSPICE is no exception. Jack Shepherd gets lost in the countryside and eventually, after passing a statue that resembles Christ which turns its head in the direction he takes, he runs out of petrol and ends up at a country house. He's invited in and finds himself part of a large dinner party whose members resemble OAP versions of the cast of the movies of David Lynch, John Waters and The Rocky Horror Picture Show. Full of soup and spaghetti he declines the huge roast dinner and brimming flagon of gravy that's placed before him, only to incur such displeasure in his waitress that she throws the whole lot on the floor. Alan Dobie plays the deliciously sinister supervisor of the proceedings who tells Shepherd not to worry and offers him a room for the night once he has explained that they have no petrol (an ancient-looking minibus runs on 'Diesel Only', or at least that's what the handwriting over the petrol cap says). And so Shepherd has to spend the night in a Robert Aickman House, which means he ends up having to share an overheated bedroom with nervous pathetic Jonathan Cecil who has a large model bird above his bed that he can operate the wings of to help him sleep, and who doesn't want the light switched off. Earlier in the evening Shepherd has met sexy Marthe Keller who has dropped an earring she presumably wants returned and so off he goes on a nightmare journey to find her, only to come across a photograph depicting her in period dress and dated 1938. We finally make it to morning, only for Shepherd to be informed that 'someone' has died during the night. They are rather efficiently already in their coffin, and as he is told that the only way he can leave is to accompany it we are treated to a final shot of Shepherd crammed into the back of a hearse as it leaves the mansion.
Atmospheric, enigmatic and nightmarishly disorientating. THE HOSPICE works very well as a 50 minute adaptation of an Aickman story. Performances, location and music are all excellent, but perhaps the biggest surprise for me was that it was directed by Domenique Othenin-Girard who was responsible for the forgettable HALLOWEEN 5 and the regrettable OMEN IV - THE AWAKENING. On the basis of those two movies I had been anticipating something far more workmanlike and uninspired and THE HOSPICE is neither. In fact I would highly recommend it. Now to track down the other episodes in this series.