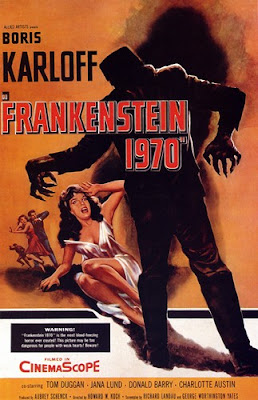 Imagine how glorious and exotic the year 1970 must have seemed to some of the studio craftspeople of 1958 - a vibrant world filled with hope, technological advancement, and endless possibilities. None of them seem to have been involved in the making of this film, however, which does its best to liven up the same old monster making story with an atomic reactor, a contemporary setting and a monster that looks like the end result of a comedy road accident, but more about him later.
FRANKENSTEIN 1970, despite its 'futuristic' title, begins with a distinctly retro feel (even for 1958) as a girl is chased through swampland by a faceless, hook-clawed monster. This sequence only lasts a minute or two and isn't at all bad. It's edited and paced well and unfortunately, although we don't know it yet, has just set a standard the rest of the picture is going to have a lot of trouble meeting.
The opening is a gag, a staged sequence filmed by a television crew which has travelled to Germany to film a documentary about the history of the Frankenstein family. There's talk of an anniversary but absolutely none of the mathematics add up so it's probably best to ignore that the same way the actual film-makers have. The only Frankenstein still living is concentration camp survivor Boris Karloff. Fortunately his castle has fared rather better than he has and betrays none of the damage the fiery climax of numerous Universal and other pictures should have caused it by now. Either they have very good (and very busy) stonemasons over in the part of Germany where he lives, or is it just possible that the exterior shot we keep seeing is stock footage of a model?
Karloff probably wonders what he's doing reciting distinctly dubious dialogue next to a tomb that allegedly contains 'Richard, Freiherr von Frankenstein I' and whose stonemason couldn't even get the last word of his epitaph centred properly, but then he was probably too busy rebuilding the castle yet again. The TV crew betrays not the slightest hint of futuristic fashions and while we're not expecting to see a flared trouser or a feather boa it does make one wonder quite why they chose FRANKENSTEIN 1970 as a title at all unless by some weird use of a time machine that isn't mentioned Karloff is actually the 1970th Frankenstein to hold the name. But that would be silly.
Boris has agreed to the TV crew coming because the money they're paying him is going towards the atomic reactor he has in the basement. His gurning manservant discovers the Baron at work in his secret laboratory and pays the price for his Charlie Ruggles impersonation (if you don't know who he is then look him up, or on second thoughts don't) by having Boris hypnotise him with a pair of scissors and then take his heart out. Boris is carrying on the family tradition by making one of the cheapest, tattiest-looking monsters in Frankenstein history, who you can't help but feel sorry for as he wanders around the castle looking like a half-hearted Michelin man in his head-to-toe bandages with two eye holes in the head bit for eyes he doesn't even have until close to the end of the film. The ending is underwhelming to say the least and seems to involve a cloud of radioactive steam killing both monster and creator that then miraculously disappears in time for the wind up.
If the above leads you to think I don't like FRANKENSTEIN 1970, nothing could be further from the truth. It's not a terribly good film but Karloff really is quite delicious in his role, the Cinemascope framing is often well used and there's the kernel of a good idea here. The concept of treating the old horror classics as if they really happened and then bringing a reality TV / documentary crew in to meet their ends at the hands of the legend they've come to exploit is a subject ripe for satirical fun on a number of levels. FRANKENSTEIN 1970 doesn't develop the idea at all but with the right handling a remake could be very interesting indeed. FRANKENSTEIN 2020 anyone?
Posted by John Llewellyn Probert at 7:00 am