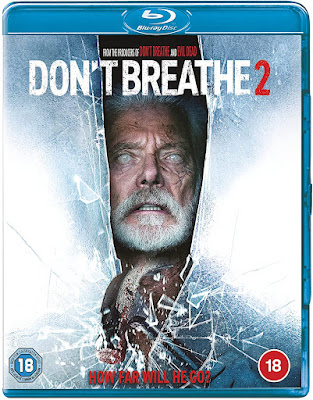 The sequel to Fede Alvarez's 2016 original gets a 4KUHD, Blu-ray and DVD release from Sony following its digital rental release last month.

Star Stephen Lang is back as Norman Nordstrom, the blind Gulf War veteran who had to defend his property against three delinquents intent on robbing him. Despite the fact that Nordstrom was found to be keeping a pregnant woman tied up in his basement in the original, and that when he accidentally killed her he went after another girl with the intention of artificially inseminating her with a turkey baster, here he's portrayed rather more sympathetically. He does have a daughter now, though, and where she actually comes from forms part of the plot of this follow-up.

Whereas DON'T BREATHE was silly but grim, DON'T BREATHE 2 is silly but a lot more fun. For those horror fans who didn't get on with the likes of recent horror cinema releases like CENSOR or CANDYMAN I suggest you look no further than the good old-fashioned splattery daftness of DON'T BREATHE 2, a film where you don't need to have seen the first one or even have brought your brain along to the cinema to watch it.

The premise is ridiculous, there's plenty of the old ultra-violence (and an 18 certificate - hurrah!) and the leader of the baddies looks like Brian Cant from BBC children's TV of the 1970s. Best of all, slap bang in the middle of all the heady tomfoolery there's the best/worst silliest most badly thought out movie surgical scene I think I've seen outside of the films of Al Adamson. Add in a bonkers performance from Fiona O'Shaughnessy (Jessica Hyde herself) and her electric wheelchair which deserves a credit all its own & I hope I've managed to convey some of the reasons why DON'T BREATHE 2 is exploitation entertainment of a type we don't get to see enough of these days.

Extras on Sony's disc include three short making of featurettes (about five minutes each), an alternate ending that's alternate by literally just a few extraneous seconds, and two audio commentaries. The first is from director Rodo Sayagues in English, and the second is from the director, producer Fede Alvarez and Director of Photography Pedro Luque in Spanish. Both of these commentaries are worth listening to and both commentary tracks do come with subtitles. Unfortunately it's not at all obvious how to access them via the menu and it may not even be possible. However if you toggle your Blu-ray player's subtitle options enough you'll find them. On our system the English commentary was the 19th subtitle option and English subtitles for the Spanish one was the 21st.

DON'T BREATHE 2 is out on 4KUHD, Blu-ray and DVD on Monday 15th November 2021 and is already out to rent on Digital