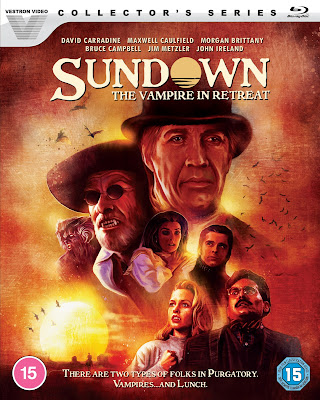 The film director Anthony Hickox made between his 1988 debut WAXWORK and its sequel, WAXWORK II: LOST IN TIME (1992) gets an extras-packed Blu-ray release as part of the Vestron collection.

The town of Purgatory (which from the nicely shot locations appears to be in Monument Valley) is home to a community of vampires, led by Count Mardulak (David Carradine). They've been trying to perfect a blood substitute but something has gone wrong withe process, so they call in inventor David Halloran (Jim Metzler) to help his old university rival Shane (Maxwell Caulfield) sort out the process. Unfortunately plans are afoot by Jefferson (John Ireland) for a vampire rebellion. Add in the arrival of the last of the Van Helsings (Bruce Campbell) who falls for local girl Sandy (Deborah Foreman) and the scene is set for a ridiculous over the top vampire gunfight finale. 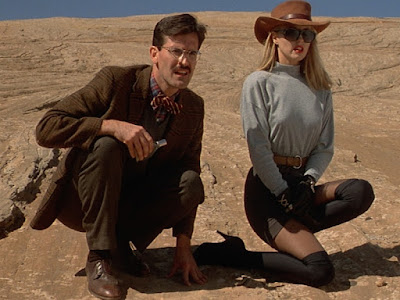 Back when SUNDOWN was being made Anthony Hickox said he purposely didn't want an opening title sequence so as not to spoil the surprise of all the familiar exploitation faces who appear in the film. It's certainly fun spotting all the above as well as M Emmet Walsh, Dana Ashbrook, Morgan Brittany and others. The sharp-eyed will spot a poster for THEATRE OF BLOOD, the movie directed by Hickox's father Douglas (apparently at his son's insistence), at the beginning of the film.

But is SUNDOWN any good? There's certainly nothing else quite like it. It's not as quirkily entertaining as the original WAXWORK and not as full-on horror as Hickox's later HELLRAISER III, but it's still a great deal of fun. 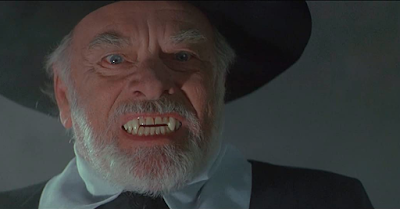 One of the undisputed highlights of the film is the lush, sweeping, Western pastiche-style orchestral score by Richard Stone and so it's a delight to have a feature-length commentary all about it (and tying it into the sequencing of tracks on the soundtrack album) from acknowledged movie music expert Randall D Larson (composer Stone is sadly no longer with us). There's also a more traditional commentary track with director Hickox and Director of Photography Levie Isaacks.

Other extras include Wild Weird West - a new 16 minute interview with the director; Bloodsuckers From Purgatory -  a new 14 minutes with special effects creator Tony Gardner; and archival interviews from 2008 with Bruce Campbell (12 minutes), David Carradine (13 minutes) and M Emmet Walsh (11 minutes), plus the usual trailer and stills gallery. Nice package. Now I'm off to buy the soundtrack CD.

Anthony Hickox's SUNDOWN: THE VAMPIRE IN RETREAT is out on Blu-ray as part of the Vestron Collection through Lionsgate on Monday 15th November 2021

Posted by John Llewellyn Probert at 9:10 am