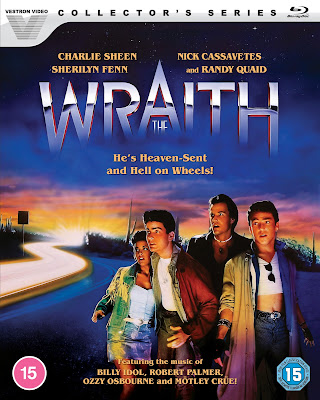 It's time to revisit an early starring role for Charlie Sheen as Mike Marvin's THE WRAITH gets an extras-packed Blu-ray release as part of Lionsgate's Vestron Collection.

The highway through a small desert town is terrorised by a MAD MAX-lite gang that challenges drivers to races with their car as the prize, ensuring they win by fair means or foul. But that's not all they've been up to. Before the film starts they've hacked to death the boyfriend of Keri (Sherilyn Fenn) because insanely jealous gang leader Packard (Nick Cassavetes) believes she should be going out with him. 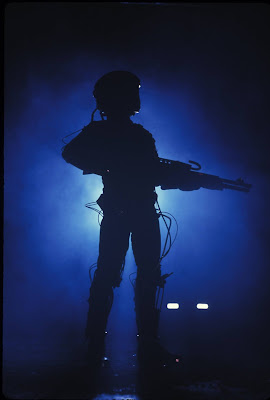 But wait! What are those mysterious lights in the sky that somehow coalesce into a sleek black automobile? And who's that new guy in town with scars on his back and neck? Can either have anything to do with the fact the gang members are being killed off in vehicular-based accidents?

A supernatural revenge movie with plenty of stunts and car race action, THE WRAITH is all a bit daft but everything is carried off with such confidence that if you loved this back in the 1980s the chances are you're still going to love it now. Modern audiences might be left scratching their heads a bit but this is very much a movie of its time, including a soundtrack packed with the kind of power rock songs typical of the period. 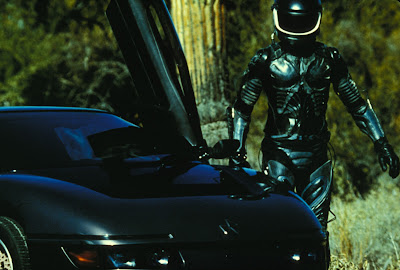 Extras include a whopping three commentary tracks if you include the profile of the film's score moderated by Michael Felsher and featuring co-composer J Peter Robinson. Another commentary is provided by writer-director Mike Marvin and the third by actors Dave Sherill and Jamie Bozian. 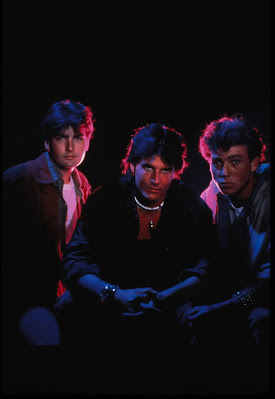 Tales From the Desert is a 16 minute interview with Mike Marvin, Rughead Speaks gives us 12 minutes with legendary character actor Clint Howard, Ride of the Future is 12 minutes with the team responsible for the cars seen in the film, and The Ghost Car is 11 minutes on the film's visual effects. There's a half hour featurette on the locations used in the film 'Then And Now'. Finally you get the usual stills, trailer and TV spots, plus an alternate title sequence that looks as if it's been taken from a VHS master and gives the film's title as INTERCEPTOR.

Posted by John Llewellyn Probert at 9:38 am