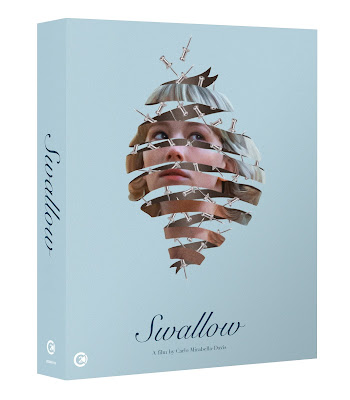 After getting it's UK premiere at 2019's Halloween Frightfest, Second Sight are bringing out Carlo Mirabella-Davis' debut feature SWALLOW in one of their special edition Blu-ray box sets packed with special features.

Hunter  (Haley Bennett) seems to have it all. She's just got married to handsome, successful Richie (Austin Stowell) whose parents have bought them a brand new home, and when she discovers she's pregnant the family is delighted.

But Hunter isn't, and something buried deep inside her psychologically cracks under the pressure. As a coping behaviour she starts to swallow things, beginning with a marble before moving onto to large, and eventually sharper, objects. A trip to the hospital for the emergency removal of a safety pin result in her undergoing psychiatric treatment, where elements of her past that may have led to her current behaviour begin to emerge. But is it medication that Hunter needs, or just an entirely different kind of life?

A serious study of how childhood psychological traumas can be exacerbated by the kind of adult environment and lifestyle that just doesn't suit someone (despite it being what it is assumed many people strive for), SWALLOW is very much a film for the art house audience, by which I mean don't come in expecting Cronenbergian levels of body horror or Haley's condition developing during the course of the film to alarming excess (unless you consider eating earth excessive). The design of Hunter's house is superbly cold and sterile and the performances are all carefully nuanced, with Haley Bennett in particular outstanding.

Extras include a commentary track by the director and producers Mollye Asher and Mynette Louie. There are also new interviews with the director, Mollye Asher, editor Joe Murphy, and composer Nathan Halpern. Alexandra Heller-Nicolas provides a profile of the film and we also get Carlo Mirabella-Davis' short film KNIFE POINT.

Finally, the disc comes in a rigid slipcase with new art by Haley Turnbull which also contains a softcover book featuring new writing on the film from Anne Billson, Jordan Crucchiola and Ella Kemp, as well as six collectors' art cards. 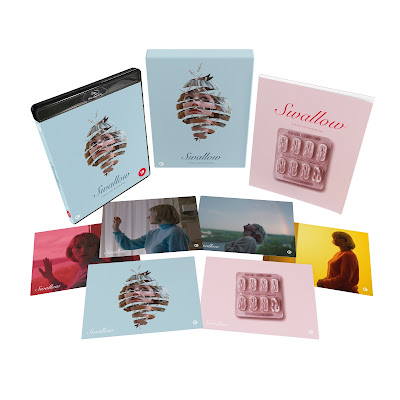 Posted by John Llewellyn Probert at 9:30 am