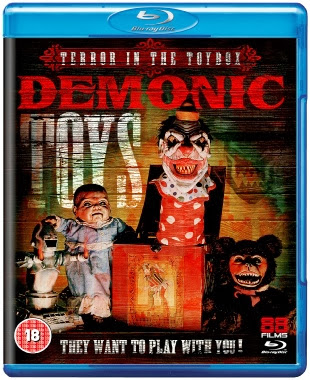 Producer Charles Band has quite a predilection for little things. The PUPPET MASTER series has reached ten films in all, and DOLLMAN (1991) was an attempt to have a Tiny Tim Thomerson as its central character. DEMONIC TOYS has just been released by 88 Films on Blu-ray. Like PUPPET MASTER, it’s another of Band’s (and his company Full Moon’s) forays into the killer doll subgenre. It’s directed by Peter Manoogian, who also made the 1980s fan favourite ELIMINATORS (when are you bringing that one out, 88 Films?) and it’s actually not at all bad. 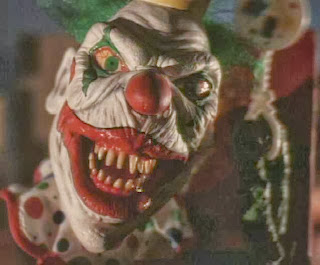 We open with one of the most stylish sequences ever to be included in a Full Moon film. Viewers unfamiliar with anything outside of mainstream cinema should not get their hopes up but those who know Mr Band’s work will be pleasantly surprised. Star Tracy Scoggins sits amidst grandfather clocks whose pendula swing (almost in rhythm) while two small boys play a bizarre card game. It quickly transpires that this is a dream she is relating to her police officer colleague who also happens to be her lover who also happens to be assisting her in a sting operation to catch a couple of gun runners (full marks for economic exposition there, chaps). The sting goes wrong, Tracy’s man is killed, and she and the two baddies end up in a warehouse. One of the baddies is bleeding from a bullet wound. His blood seeps through a crack in the floor and does...something. It turns out the warehouse is used to store all kinds of toys that were presumably far too scary to ever be allowed on shop shelves. As he bleeds they come to life. Well, a couple do, including a frankly terrifying jack-in-the-box, a teddy bear with teeth, and a baby doll that can run, stab, and cheerfully announce that 'I can shit myself' before doing people in. 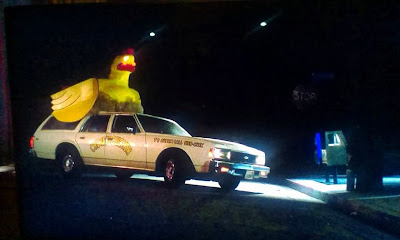 The reasons these toys have come to life is too complex and daft to go into here, suffice to say that we get the craziest flashback sequence I have seen in a while that involves the gift of a stillborn demon baby to three trick-or-treating children on Halloween in 1929. Meanwhile in the present, the closest thing DEMONIC TOYS has to a hero has arrived in his chickenmobile (see illustration). Once he’s inside and met up with a security guard and the goth girl who lives in the air conditioning system, it’s time for a daft (but thoroughly enjoyable) game of cat and mouse before the climax. This is so bonkers that I almost want to see the film again right now, involving as it does a toy soldier, a human-sized demon, Tracy tied to the floor and a man in a giant teddy bear suit. As is, I hope, the case with many of the reviews on this site, if you’re still reading this you know you need to see this film. 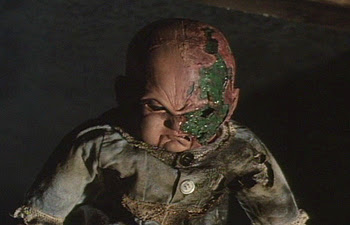 88 Films’ Blu-ray transfer is smashing and I’m sure there can be no argument that a Charles Band film has probably never looked this good. Extras include a couple of trailers and a featurette, and there’s a booklet with notes by Calum Waddell. Charles Band’s films vary massively in quality, but DEMONIC TOYS is a whole load of fun that I wouldn’t hesitate to recommend to like-minded enthusiasts of low budget silliness.

88 Films released DEMONIC TOYS on Blu-ray on 9th December 2013 as an Amazon exclusive. Everyone else will have to wait until 27th January 2014

Posted by John Llewellyn Probert at 9:50 am