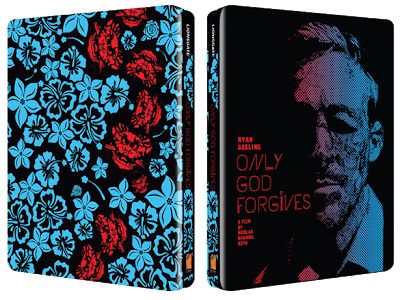 I reviewed ONLY GOD FORGIVES when it came out at the cinema, but Lionsgate Home Entertainment has just brought Nicolas Winding-Refn's latest out on Blu-ray, DVD and steelbook editions (that's what the steelbook looks like up there) so I thought I'd reproduce my review here to save people searching for it, as well as adding a few comments about the extras on the disc.

I’ve been a fan of Nicolas Winding Refn’s since even before he admitted his love for the films of Pete Walker (“British cinema at its best - I love this movie!” he said of Walker’s 1969 crime picture MAN OF VIOLENCE). His recent movies have felt like art-house treatments of well-worn exploitation tropes. VALHALLA RISING had a CANNIBAL HOLOCAUST feel to its dread inevitability, and DRIVE is very much FAST & THE FURIOUS for grown-ups. Both those movies depict loners who say little (if anything) and find themselves having to resort to the extreme violence of which they are all-too-capable in order for them to stay on the path of their own noble world view. If you like, both films are about the power of (literally) man. Rest assured I don’t expect to disappear up my own behind with all of this, but it’s interesting that Refn’s latest movie, ONLY GOD FORGIVES, is about the very opposite. In fact it’s a slow, and very deliberate, characterisation of one man’s weakness. The fact that the man is played by the ‘hero’ of Refn’s previous picture makes that comparison all the more resonant, and is infinitely fascinating for it. 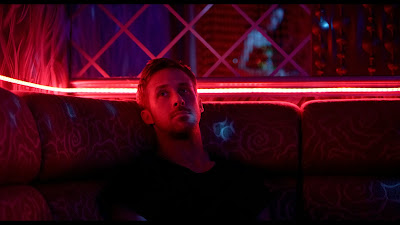 ONLY GOD FORGIVES is set in Bangkok. Not the smokey, sweaty place that Bangkok really is, but rather a neon-lit wonderland of darkness from the mind of an Argento acolyte. Ryan Gosling plays Julian, a respected figure in the criminal underworld who runs a Thai boxing club as a front for a drug smuggling ring. His brother Billy is psychotic and likes to slash up young girls. When a vengeful father kills Billy, their mother Crystal (Kristin Scott Thomas) arrives seeking revenge. How Julian deals with this, and with the police and the bizarre sexual hold his mother has over him, forms the rest of the film.
ONLY GOD FORGIVES is not about plot. It’s about emotion, and about how we react to, and deal with, its extremes. Like VALHALLA RISING, there are lots of scenes that feel as if they should be going on too long but somehow they’re not. Nothing seems to be happening and yet you can’t take your eyes off the screen. Partly this is due to the fact that the film looks absolutely gorgeous - a mixture of Kubrickian camerawork, Argentoesque lighting, and a Lynchian conceit that makes every shot something you find yourself wanting to stare at for hours. 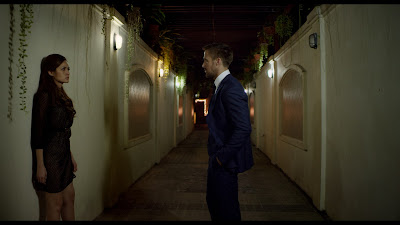 The David Lynch influence doesn’t end there. Investigating the crimes is a policeman known as the Angel of Vengeance (Vithaya Pansringarm - an actor apparently plucked off the street by Refn, whose understated performance works in the film's favour far better than any eye-rolling Hollywood villain). The sword he keeps concealed on his back is his instrument of execution. When he’s not torturing members of Julian’s gang (and there’s one extreme scene in here that will have all but the most stoic of viewers cringing) he’s singing songs in a Karaoke bar while his uniformed staff look on.
It all ends in a predictably grim way, but leaves the viewer wanting to watch it again. Despite the languid pacing there’s the feeling that things have been missed, and I don’t doubt that, like VALHALLA RISING, this is one that’s going to reward repeat viewings.
Performances are all excellent. Ryan Gosling, who was very much in the driving seat in DRIVE (sorry) is here much more the plaything / punchbag of his director. Kristin Scott Thomas does an amazing job of coming across as an overly masculine female impersonator's impression of her. The music by Cliff Martinez deserves a mention as well - all rumbling bass rhythms with flashes of keyboard and electronica that strengthen the Argento vibe of certain scenes. 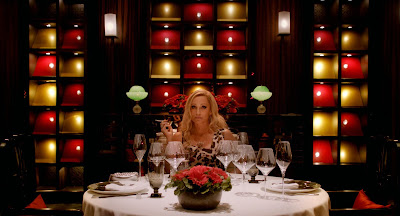 The star of the film, of course, is Nicolas Winding Refn himself. After watching this film I’m not surprised he is an admirer of the films of Pete Walker, whose movies always featured strong female characters and weak male ones who found themselves buffeted by events and unable to do much about them when they were given the chance. That’s what ONLY GOD FORGIVES feels like, and in the Thai criminal underworld, that can only end in horror.
Extras on the disc include a feature-length commentary by Refn that's well worth a listen, as Refn points out things that are easily missed the first time around, as well as offering some intriguing insights into this, VALHALLA RISING, and DRIVE. There are also eight 'Behind the Scenes' clips, two trailers, and a collection of poster concepts, as well as details of the artwork competition that resulted in the lucky winner having their design on the steelbook.