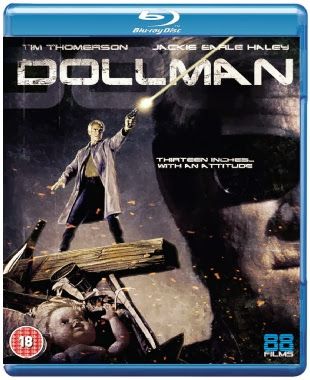 What’s that coming over the hill? Is it a bird? Is it a plane? Actually I can’t see  anyone coming over the hill, so it’s probably DOLLMAN.
With his predilection for tiny things and an imagination that far outstrips the money he puts into his films (not something that’s very difficult) Charles Band decided to take the future-cop-in-present-day-US idea of his terrifically enjoyable  TRANCERS (1985), employ the same lead actor (Tim Thomerson) and then do something very odd indeed by shrinking said cop character down to thirteen inches high.
Thomerson’s Brick Bardo isn't actually from the future. In fact he’s from the planet Arturus “10 000 light years from earth” where everyone is the same size as him. His adventures on Arturus make up the first twenty minutes of the film, where he saves a laundry room full of very fat ladies and obese children who are being threatened by an ultra-low budget version of Brad Dourif. 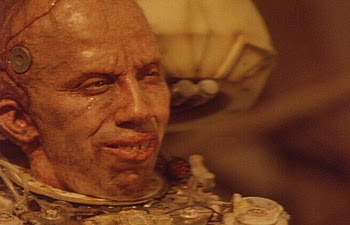 Sacked from his policing job for causing two of the women to have heart attacks, Brick finds himself kidnapped and dragged to a grim BRONX WARRIORS-style wasteland, where a floating head orders his death. Brick kills all the head’s henchmen and a chase using really cheap models of spaceships ensues. They both end up going through “some sort of space warp” to end up in the kind of New York even MAD MAX might think looked a bit scruffy. Brick gets involved with the local anti-drug and gang crusader Kamala Lopez, while the floaty head offers gang leader Jackie Earle Haley (and my God he looks young in this) a trans-dimensional bomb in return for his assistance. What he gets is Jackie’s thumb squishing him before making off with the bomb anyway. Kamala gets kidnapped and there’s a lot of running around and explosions on the stretch of wasteland they were presumably allowed to film on before the tran-dimensional bomb goes off. The End.
DOLLMAN is very brief at about 73 minutes minus the credits but it still feels as if it drags. As I’ve mentioned above, the first twenty minutes are just fine, and if the entire film had been set on Brick’s home planet and the miniature idea had never been entertained, this would probably have been a much more enjoyable film. I really quite liked director Albert Pyun’s debut effort THE SWORD AND THE SORCEROR, but one gets the feeling his heart wasn’t into the tiny stuff. Once on earth, Brick’s small size is never used to his advantage. In fact very little is made of the fact that he’s the size of an Action Man, although it does lead to some chucklesome shots of his holding on to a car or flying through the air. 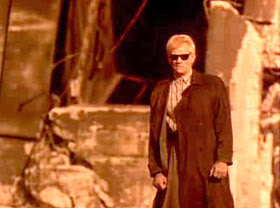 88 Films’ HD transfer looks very fine on Blu-ray. There are some trailers, a featurette, and a 2013 Vidcast from Charles Band and Tim Thomerson in which Band mentions his quite jaw-dropping movie project OOGA BOOGA as well as showing us the promotional line of dolls that goes along with it. I have no idea if OOGA BOOGA will ever be seen in this country with that title, but it would seem Mr Band still isn’t finished with the world of tiny things. DOLLMAN isn’t the best of his projects but if you’re a completist you’ll definitely get a kick out of the beginning. And I still can’t wait to see DOLLMAN VS DEMONIC TOYS.