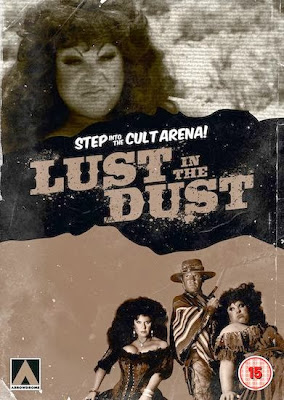 Before I begin this review proper I’d like to state that I’m a huge fan of the films of Paul Bartel. DEATH RACE 2000 (1975) was a superb comedy that was remade recently with every scrap of satire that had been the original film’s intention removed. EATING RAOUL (1982) was a charmingly odd comedy that featured Bartel himself along with Mary Woronov as a couple killing people to finance the purchase of their dream restaurant. His LUST IN THE DUST, however, is a comedy of a rather different sort. A quick check of the relevant sources reveals to me that this film has quite a cult following and no doubt all three or so members of that cult will be delighted to hear that it’s just about to be re-released in the UK on the Arrowdrome label.

We’re in the Wild West. Into the town of Chilli Verde ride Rosie Velez (Divine) and Man With No Name wannabe Able Wood (Tab Hunter). Rosie’s looking for work at the bar of Marguerite Ventura (Lainie Kazan) and proves her "talent" by singing an absolutely dreadful song. The town is home to a number of famous faces, including Henry Silva and Cesar Romero, all of whom are hunting for a hidden stash of gold. The only clues to its whereabouts are a limerick and a map which, unknown to most at the start of the film, is tattooed in two parts - one half on each leading lady’s bottom. Everyone’s favourite Western loony Geoffrey Lewis rides into town with his gang, which includes Woody SPARTACUS Strode. Soon they’re looking for the gold as well. After an interminable combination of bottom of the barrel innuendo and more gurning than one might see in an Italian 1970s demonic possession movie, the gold is found, nearly everyone is killed, and Divine is left sitting on a rock to ponder the meaning of it all. 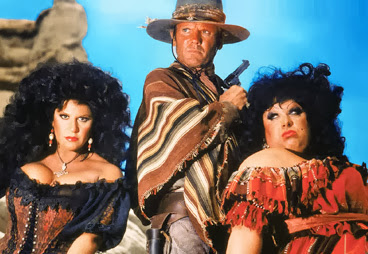 A downright weird attempt at a BLAZING SADDLES-style Western spoof, only with a fraction of the budget and a cast composed of underground film stars and cult character actors, LUST IN THE DUST aims as low as possible in the comedy stakes and, to that end at least, it succeeds. Apparently the script was originally offered to John Waters and he turned it down. I have to admit I’m quite a fan of the films of Mr Waters as well as Paul Bartel, but the script here isn’t really deserving of either of their talents. The actors all behave as if they’ve been shown CARRY ON COWBOY and told that that level of restrain was not appropriate for this particular comedy Western. I’ve always quite liked Divine, even though I found him quite terrifying in his John Waters roles, and his aggressive mugging certainly helps to enhance the pantomime theatrics here. As I’ve said above, LUST IN THE DUST has developed quite a cult following over the years, but, like some of the actors in it, the comedy is a bit too broad for my tastes. Arrow have provided a very nice 2.35:1 widescreen transfer of the film with minimal print damage. Extras are minimal too, in keeping with other Arrowdrome releases - you get a trailer, a collector’s booklet and reversible cover art, and that’s it.


Arrow Films are releasing LUST IN THE DUST on the Arrowdrome DVD label on 9th December 2013
Posted by John Llewellyn Probert at 9:06 am

Email ThisBlogThis!Share to TwitterShare to FacebookShare to Pinterest
Labels: 1980s, Trapped in the Room With It