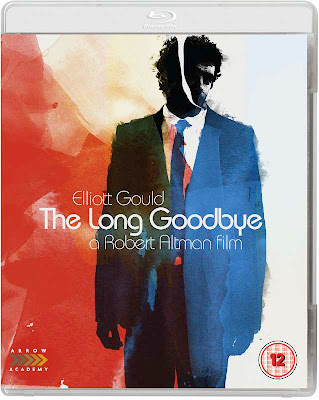 Robert Altman’s 1973 adaptation (from a screenplay by Leigh Brackett) of the Raymond Chandler novel gets the Blu-ray treatment courtesy of the Arrow Academy label. And what a lovely package it is.
Elliott Gould plays chain-smoking private investigator Phillip Marlowe, living in a tiny turret flat in Los Angeles accessed by a private elevator and next door to a house filled with topless young lady hippies, His only friends are his cat who only likes one specific type of tinned food (some of the best cat acting I’ve seen in a long time, by the way) and Terry Lennox (Jim Bouton). When Lennox asks Marlowe for a one-way lift to Tijuana it’s the start of a complex story that kicks off with the police pulling the detective for questioning after Lennox’s wife is found with her skull beaten in. Lennox is subsequently found to have committed suicide and the case is apparently closed. However, a request from pretty Eileen Wade (Nina van Pallandt who went on to do not much else of significance but did appear in Albert Pyun’s THE SWORD AND THE SORCERER) for Marlowe to locate her missing husband Roger (the ever-bonkers Sterling Hayden from DR STRANGELOVE, THE FINAL PROGRAMME and DEADLY STRANGERS) proves to be more complicated than he expects, especially when gang boss Marty Augustine (Mark Rydell who directed ON GOLDEN POND) turns up demanding the $350 000 Marlowe owes him. 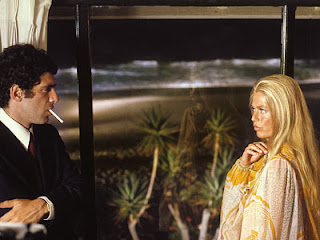 Probably the most noir a 1970s thriller set in Los Angeles could be, Robert Altman’s film gives us a cynical view of both the city in which it is set, and the people who live there. This is a crumbling, tarnished depiction of LA, where hedonism feels tired and few question the casual violence of organised crime. Holding everything together is a bravura performance by Gould, who manages to tiptoe just the right side of rumpled seediness to be likeable. Altman’s direction gives rise to a whole host of interesting camera setups, many of which show a considerable wit at work. Many of the dialogue scenes, especially near the beginning, feel improvised, and John Williams supplies a curiously experimental music score which consists solely of the title theme but interpreted in many different ways (some cleverly segueing into one another during scene changes).
Arrow's widescreen 2.35:1 presentation is very nice, with the only blemish being some kind of hole in the top right of the print that occurs at 1:14 and is present as a distracting white dot for about a minute. Otherwise it looks great. 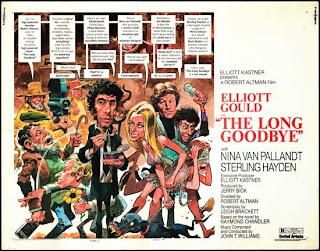 There are loads of extras, including material ported over from the 2002 DVD release. These include interviews with Robert Altman, Elliott Gould, and director of photography Vilmos Zsigmond. There’s also ‘Giggle and Give In’ - Paul Joyce’s documentary on Altman, Elliott Gould discussing the film on stage, Maxim Jakubowski on Hard Boiled fiction, David Thompson on Robert Altman, Tom Williams on Raymond Chandler, a trailer, radio spots, a reversible sleeve and a booklet. All in all it’s a very fine presentation of a very fine film.


Arrow will be releasing Robert Altman's THE LONG GOODBYE on Blu-ray on the Arrow Academy label on the 16th of December 2013
Posted by John Llewellyn Probert at 8:19 am