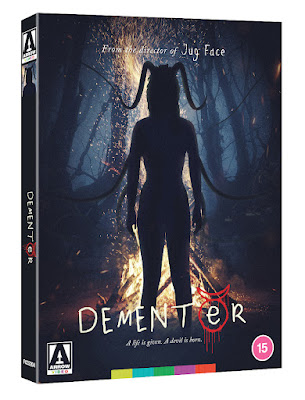 The new film from director Chad Crawford Kinkle is getting a UK release, premiering on the Arrow Channel on Friday 1.10.21 with a special limited edition 2 disc Blu-ray set release the following Monday.

The Blu-ray set comes with a copy of Kinkle's first feature, JUG FACE, which I reviewed on here back in 2014 when it was released on DVD by 101 Films as THE PIT. I liked THE PIT enough that it made it into my Top 10 of 2014, where I called it 'a fine backwoods USA horror about a community in thrall to a Machenesque monster lurking in their midst'. JUG FACE / THE PIT is well worth checking out.

However, I'm sorry to report that DEMENTER really isn't. 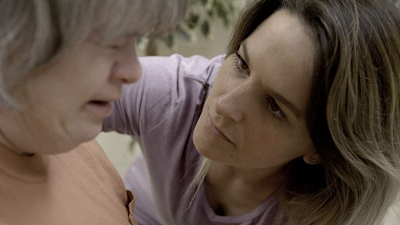 Usually I start these reviews with a little introduction of what the film is about but right now, two hours after watching this one I still can't tell you what was going on or why. A girl called Katie gets a job at a care home. There are flashes of something weird that may have happened to her, with Larry Fessenden's voice counting a lot layered over the top. Katie becomes convinced something is up with one of the care home's residents (played by the director's sister Stephanie) but exactly what is never clear. It's also not clear what Katie plans to do to Stephanie and whether she thinks she needs to be saved or destroyed.
DEMENTER may have noble ambitions but it all comes across as a bit of a mess, with a muddled story that's dragged out to 80 minutes, imagery that confuses rather than clarifies, and a music score that's overly intrusive and ends up annoying. Scenes such as a needle piercing skin for a blood sample feel as if they were put together by an overly neurotic small child who is witnessing the most terrifying thing imaginable. Katie's character is so poorly developed the viewer never knows quite how to react to the things she does. It's certainly a comedown from JUG FACE and including that film here as part of the set is actually just rubbing salt into the wound. 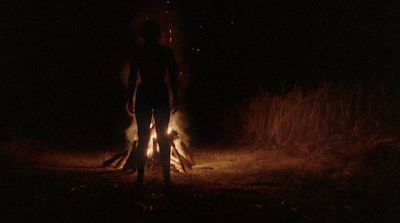 The DEMENTER disc comes with three commentary tracks (Kinkle, cast and crew, and Kinkle and critic Chris Hallock), making of, Larry Fessenden interview, short films and a trailer and stills gallery. JUG FACE comes with Kinkle in conversation with Jon Towlson, Lauren Ashley Carter talking to Robert Nevitt and Chad Kinkle taking you on a tour of his face collection (yes that's right). It's an admirable package but it's a great shame it's not for a better main feature. 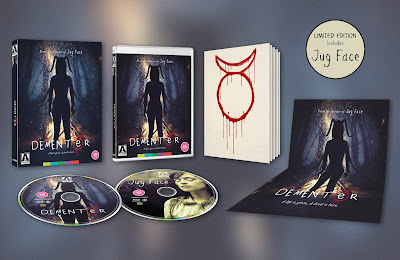 Posted by John Llewellyn Probert at 7:43 am