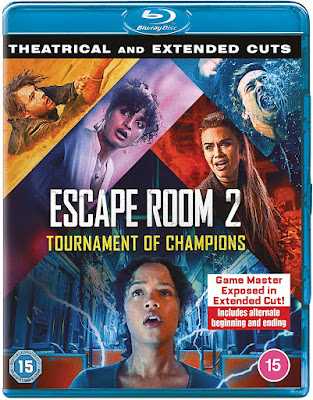 The sequel to Adam Robitel's highly entertaining ESCAPE ROOM (which I reviewed here) is getting a Blu-ray, Digital and DVD release from Sony.

The winners of the first film find themselves on an underground railway carriage in the company of people who are previous winners of similar competitions. Before you can say 'that must have taken a fair bit of unlikely planning' they've been plunged into a championship of champions with the kind of elaborate time-sensitive, failure = death puzzles we've come to know and love.

If you liked the first ESCAPE ROOM (and I very much did) then chances are you'll find ESCAPE ROOM: TOURNAMENT OF CHAMPIONS buckets of ridiculous fun too. My favourite puzzle involved something very Elder Scrolls Skyrim set against the backdrop of a gorgeous Dr Phibes-style (or rather Brian Eatwell-style) art-deco set. Forty years ago this would have got called SON OF SAW in other territories. Adam Robitel directs and once again reinforces his reputation as a Leigh Whannell-style up and coming creator of well crafted exploitation fare.

Sony's Blu-ray includes two cuts of the film - theatrical (88 minutes) and extended (96 minutes). With DVD it's theatrical cut only and on digital it depends on the platform you get it from. The two cuts are surprisingly different, with radically different openings and endings - the final 20 minutes of each version have very little in common, plus the extended cut has a different subplot running through it. Watching the two versions it's obvious that the Extended Cut was intended as the release version but either tested poorly or was deemed unsuitable and a substantial rewrite resulted in a lot of cuts plus a fair bit of new footage being added. Either way if you're only going to watch one version of ESCAPE ROOM 2 the theatrical cut is the one to go for - it's leaner, tighter and has a more effective ending. The real bonus of having the extended cut is it gives you a chance to see how radically movies sometimes get altered before then end up in the cinema. The other extras on Sony's disc include fifteen minutes worth of featurettes, including a short interview with director Adam Robitel.

Adam Robitel's ESCAPE ROOM 2: TOURNAMENT OF CHAMPIONS is out on Blu-ray, DVD and Digital from Sony on Monday 18th October 2021

Posted by John Llewellyn Probert at 8:45 am