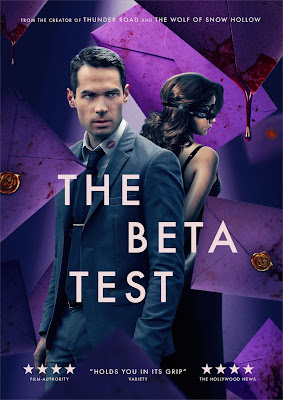 The latest film from Jim Cummings, director, writer and star of  2018's rather good THUNDER ROAD and 2020's THE WOLF OF SNOW HOLLOW gets a cinema release from Blue Finch releasing.

Jordan (Cummings) works for a Hollywood talent agency and is soon due to marry Caroline (Virginia Newcomb from THE THEATRE BIZARRE's framework story). He receives a mysterious card in the mail inviting him to an anonymous sexual encounter with 'someone who desires him'. The card comes complete with sexual preference tick boxes for him to fill in. 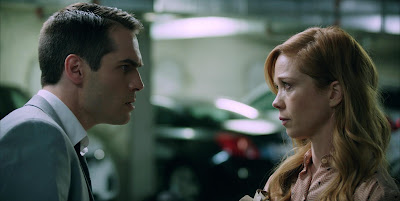 Jordan's not sure what to do. We know it's a bad idea because we've seen the rather excellent giallo-like prologue where a girl has accepted the invitation, confessed the subsequent liaison to her lover, and met a bloody death at his hands as a result. But Jordan eventually goes ahead, spending an afternoon of blindfolded passion with someone who is also blindfolded. Both remain anonymous to the other. Meanwhile, more people who have accepted such invitations are being murdered by their partners.

A clever commentary on the power of social media, lack of privacy, the nature of relationships and how almost everything you do now might be stored permanently online somewhere, THE BETA TEST is an engrossing off-kilter thriller that almost qualifies as science fiction in its denouement and resolution - there's that sense of all we see being no more than five minutes into the future.

It's skilfully written and directed by Cummings and PJ McCabe, who also stars as Jordan's best friend, while Cummings himself excels as the increasingly hysterical, almost Patrick Bateman-style agent whose grip on his world begins to swiftly crumble. It's a great follow-on from THUNDER ROAD and marks Cummings and McCabe as talents to watch.