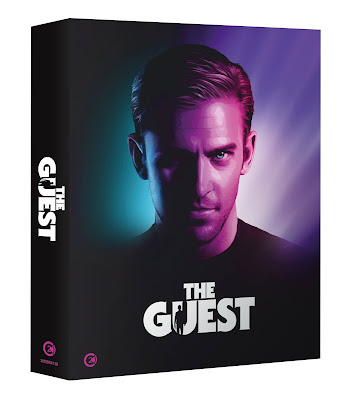 One of the best exploitation films of the 21st century gets a deserved whistles and bells 3 disc all singing and dancing (well the set does include a soundtrack CD) 4KUHD and Blu-ray release courtesy of Second Sight. 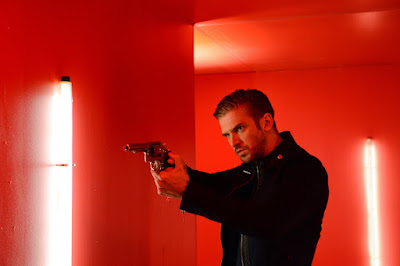 The Peterson family are still mourning the death of their soldier son Caleb when a man calling himself David (Dan Stevens) turns up at their home and claims to have been part of Caleb's regiment. Admitting he has nowhere to live David is invited to stay. Soon father Spencer (Leland Orser) gets a promotion after the man intended for it is found dead, son Luke (Brendan Meyer) is no longer troubled by school bullies, and the drug-peddling boyfriend of daughter Anna (Maika Monroe) has been put away. Does David have anything to do with this? Is he as good as he appears? Or might he just happen to be part of a secret military experiment gone horribly wrong?

A big hit when it premiered at London's Frightfest in 2014 with director Adam Wingard and screenwriter Simon Barrett in attendance, THE GUEST was quite the revelation after the team's previous efforts YOU'RE NEXT (2011) and A HORRIBLE WAY TO DIE (2010), representing a quantum leap in budget and ambition as well as giving us a star-making performance from Dan Stevens. Its influences (HALLOWEEN, THE TERMINATOR, John Carpenter films in general) aren't difficult to spot, although the only actual visual in-jokes are to HALLOWEEN III (at the end) and HALLOWEEN IV (pretty much the opening shot). It's a cracker of a movie and feels just as fresh and polished now as it did seven years ago.

Second Sight's special edition features a whole load of new extras. You get the Wingard / Barrett commentary track from the original Blu-ray release plus a new one specially recorded for this edition. There's also an excellent lengthy interview with the duo that lasts about 50 minutes and covers all their work together to date. You also get a 20 minute interview with Dan Stevens, looking like he's just stepped off the set of 2020's EUROVISION SONG CONTEST: THE STORY OF FIRE SAGA; a seven minute interview with Maika Monroe; and longer interviews with producers Keith Calder and Jess Wu Calder (23 minutes), DP Robby Baumgartner (21 minutes), production designer Tom Hammock (13 minutes) and composer Steve Moore in his room filled with classic 1970s and 1980s keyboards (12 minutes). There are also 15 minutes of deleted and alternate scenes with optional commentary, which were available on the previous Blu-ray release.

All the extras are on both the UHD and Blu-ray discs. The CD soundtrack wasn't provided for review but it looks as if it contains the songs used on the soundtrack. Steve Moore's synth score has been issued separately but it's not known if any Moore cuts are on the CD included here.

Finally, the discs come in a rigid slipcase that also includes six collectors' art cards and a 160 page book featuring new writing, script extracts, notes on the soundtrack. A fantastic package for a fantastic film and another superlative package from Second Sight. 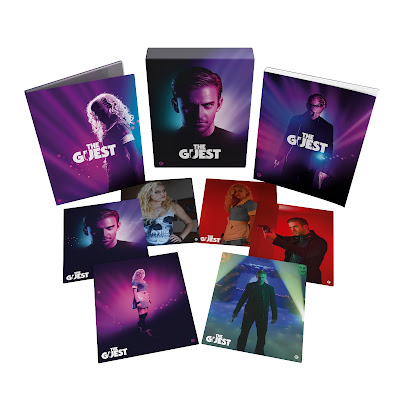