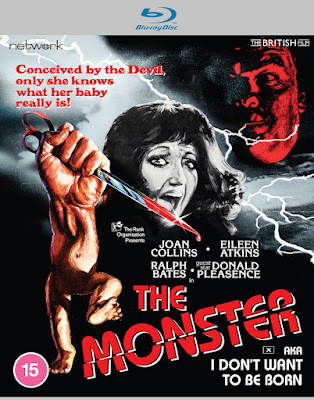 So it has come to this. Network are releasing, in a fairly decent transfer on Blu-ray, I DON'T WANT TO BE BORN (as those of us of a certain age all know it from 1980s TV broadcasts). It's the film frequently, if not exactly affectionately, referred to by fans as 'that one with Joan Collins and the dwarf' and the only film to date to result in a baby winning the Best Actor award at a major fantastic film festival (either Sitges or Avoriaz - I can't remember which).

A startlingly awful car crash of a British horror movie also known as THE DEVIL WITHIN HER in the US, THE MONSTER on this print at least, and SHARON'S BABY somewhere in the world where no-one told the person retitling it that there was no Sharon in the film, I DON'T WANT TO BE BORN is probably the only chance you’ll get to see what might happen if a bunch of 1970s BritHorror actors were to be cast into an Italian demonic possession movie that tried to rip off THE OMEN before it had even been released (which is probably partly why it doesn’t bear much resemblance to it.). Part of the reason is that this was a British-Italian coproduction, with Rank really not knowing what it was getting itself into doing a deal with Italian producer Nato de Angeles who also came up with the original story, which is presumably why some of the characters are Italian.

And ‘original’ is certainly being kind to the string of events we get to see. Attempting some sort of chronological order (there are quite a few flashbacks) Joan Collins is a stripper called Lucy (and NOT Sharon) who gets cursed by a dwarf whose advances she spurns. Before you can say ‘that’s a bit tasteless even for 1975’ she’s giving birth unconvincingly in the presence of children’s TV star Floella Benjamin and Donald Pleasance, looking as if he wishes he could be anywhere else but in this film with every single line of dialogue he utters. “This one doesn’t want to be born” says Donald as Ron Grainer’s 'everything that was sleazy about the mid-1970s' theme music kicks in to herald the main titles.

Lucy is married to Gino Carlesi (Ralph Bates sporting an unconvincing Italian accent). Gino’s sister is a nun and seems to spend all day at a convent where she has a laboratory where she can carry out animal experimentation. This has absolutely nothing to do with the film and one can only presume there was some animal research facility going free that day in which to film a few scenes. Eileen Atkins plays the role as…well…someone in an Italian horror film, which is the note everyone seems to take. Perhaps director Peter Sasdy (that’s Peter Sasdy – HANDS OF THE RIPPER and THE STONE TAPE Peter Sasdy) got them all to watch a badly dubbed Bruno Mattei picture and said “You see? THAT’S what I want.”

Joan’s baby possesses such superhuman strength that when it isn’t happy gurgling in its pram it’s whacking babysitter Janet Key over the head, cutting off Donald Pleasance’s head with a shovel (you can almost feel the relief ebbing through the screen as he realises he’s finally off the picture) and murdering his way through most of the cast. It all ends very stupidly indeed with an exorcism scene intercut with a slow motion dwarf death at the strip club. Say what you like but I don’t think there has been an ending like this before or since in cinema history. Before that we are treated to the Italian horror standbys of obvious dubbing (Caroline Munro and John Steiner), gratuitous and unnecessary nudity and a totally bizarre and out of left field dream sequence featuring Joan being threatened by a bloodstained John Steiner and Ralph Bates dressed up as a dead nun.

So now you know if you want to see this but do you want Network's Blu-ray? Well the transfer is probably as good as this rather grotty film is ever going to look. Extras kick off with a commentary which is okay if you don't know anything about this period of cinema but if you're at all familiar with it you can sit this one out, otherwise you'll soon be shouting at the screen to prompt the commentators as they struggle to remember certain facts.

There's a new half an hour interview with Peter Sasdy as well as interviews with editor Keith Palmer and continuity legend Renee Glynne as well as alternate credits with the 'proper' title, trailer and image gallery. Finally you also get a booklet by Adrian Smith.

There has never been a film quite like this. Made completely straight faced it turned out to be the very epitome of Bad Film as entertainment. And now it's on Blu-ray. Treat yourself.

Posted by John Llewellyn Probert at 9:45 am

Email ThisBlogThis!Share to TwitterShare to FacebookShare to Pinterest
Labels: 1970s, Compost Corner, Peter Sasdy, Trapped in the Room With It